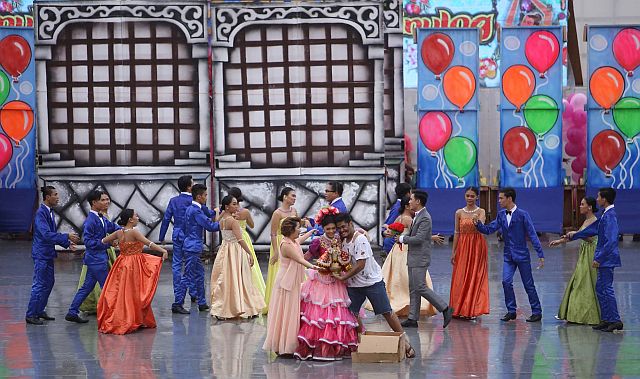 Their performance started with a dramatic introduction that cuts across all corners, that echoes amongst people from all walks of life – a broken family that overcame its rift through forgiveness, acceptance, and faith.

Today, that theme propelled the contingent of Barangay Labangon to win the grand prize for the first ever Sinulog sa Barangay, besting eight others.
For its lead dancer and festival queen candidate Ceydney Go Basalo, their win is unexpected as even their props were not finished on time, but faith and their devotion to Senor Sto. Nino pulled them through.

According to Basalo, the message of their presentation was simple – that everyone should not forget their faith in the Sto. Nino.

Meanwhile, for 20-year-old Jannah Plaza, a public school teacher and one of the dancers from Barangay Labangon, the months of practice were “worth it” and pointed out how the concepts forgiveness and acceptance are relevant today.

Conceptualized by their choreographer, Angelo Manapsal, Manayon explained that for this year, they decided that they want a presentation whose central message will “touch lives”, a representation of prayer, forgiveness, sacrifice, and acceptance.

“We decided to touch lives na kanang this Sinulog is not just a ‘props’ dance but a prayer dance,” he said.

“When you pray, you don’t just ask something. You also give something to Sr. Sto. Nino and of course, with forgiveness, Sr. Sto. Nino will be very happy with that.”
Manayon said that among the most challenging part of their presentation was to actually gather the all the dancers at the same time for rehearsals, considering that each one of them has different schedules, with some dancers and props-men having their respective jobs to attend to while others came from different schools and some were out-of-school youths.

Read Next
Auring: Cebu, 13 areas under Signal No. 1