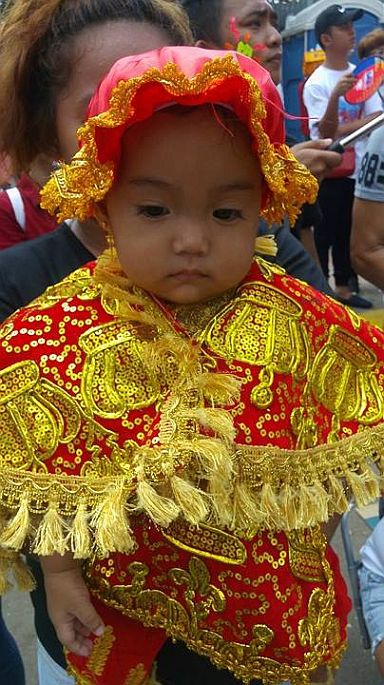 A NINE-MONTH old baby dressed up as the Señor Sto. Niño caught the attention of spectators in yesterday’s Sinulog grand parade.

Despite the weather, Ashley Nicole Anudling looked comfortable as spectators posed for photos with her along Osmeña Boulevard.

“This is one way of expressing my devotion to Señor Sto. Niño,” Ashley’s mother Shereme said.

“Many people asked for selfies. I am just happy watching my daughter and people telling me she looked like the Holy Child,” Shereme said.

She spent P1,500 for the costume and plans to buy another one next year. The mother and daughter watched the contingent from Barangay Labangon, Cebu City.

Since most of the roads were closed yesterday, Shereme and her family took a jeepney from Labangon and got off at V. Rama Street.

They walked more than one kilometer to reach their area near the Department of Health (DOH-7) office at Osmeña Boulevard.

Read Next
No signal, no problem for Sinulog visitors