Rabid dog dies after having bitten 21 persons in Mandaue City 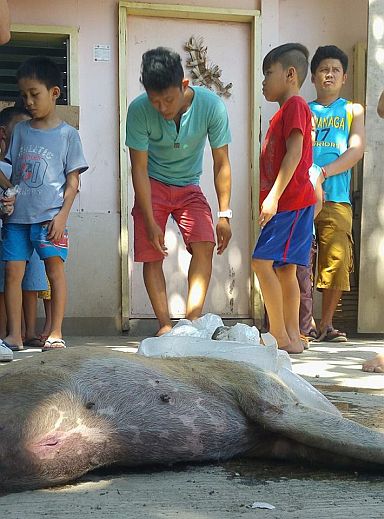 Curious residents check out the the dead dog that died after it had bitten at least 21 people in Barangay Casuntingan, Mandaue City. (CDN PHOTO / TONEE DESPOJO)

Casuntingan Barangay Captain Oscar del Castillo said they were able to capture the stray dog at around 1 a.m on Sunday in Barangay Banilad, Mandaue City, around 2 kilometers away from Casuntingan.

“We used (a) batuta (policeman’s stick) as we chased him. Even after the dog was placed inside the sack, he was still restless ,” he told Cebu Daily News.

They were surprised when the stray dog did not move. When they checked, the canine was already dead.

Del Castillo said the victims already reached to 21 people. Of the 21, seven were brough to Vicente Sotto Memorial Medical Center (VSMMC) and were given anti-rabies vaccines.

“Others are scheduled for their anti-rabies (vaccines) tomorrow since the health center is open only on week days,” Del Castillo said.

Del Castillo he, too, suspected that he was bitten by the dog because of the
marks on his right leg.

Shortly before they caught the dog, Del Castillo narrated that the dog tried to attack him by leaping at him but he was able to kick it away but they both fell down. It might be during that that time that he was scratched or might have been bitten by the dog.

When Cebu Daily News visited Del Castillo’s home the stray dog was being preserved in ice.

On the advice of the city veterinary office, the canine’s dog’s head was cut off, preserved and would be subjected to laboratory tests, he said.