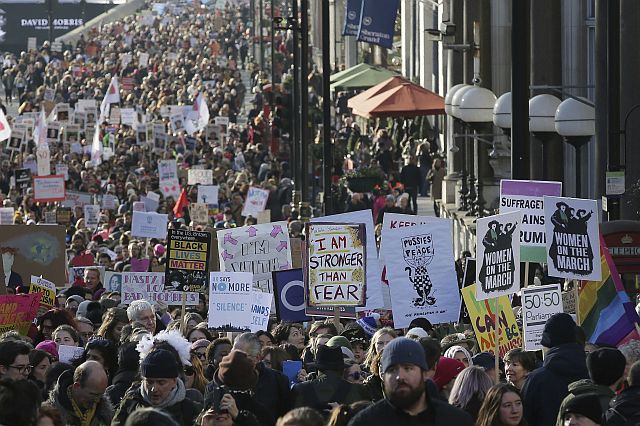 More than two million people flooded US cities as women opposed to Donald Trump led a peaceful, stunning rebuke against the new US president that was echoed in sister protests around the world.

As a sea of demonstrators brought downtown Washington to a standstill, streaming past the White House in a joyous parade of pink “pussyhats,” Trump launched a withering attack on the media, accusing it of downplaying attendance at his swearing-in a day earlier.

Trump did not acknowledge the mass protests that marked his first full day in office.

But their scale illustrated the depth of resistance to the Republican hardliner, who many fear will roll back the rights of women, immigrants and minorities.

Although the US capital does not release crowd counts, organizers of the main protest, the Women’s March on Washington, told AFP they estimated turnout at one million – quadrupling initial expectations – with some 600 sister protests held around the globe.

A tide of women and men – teens, pensioners, parents with toddlers on their shoulders – swelled into the streets around the National Mall for hours before flowing towards the White House in a determined show of unity.

“Women won’t back down,” “Women’s rights are human rights” and “Thank you Trump – you turned me into an activist,” read some of the thousands of handmade signs held aloft in the capital.

The knitted “pink pussyhats” they wore were an allusion to Trump’s videotaped boasts of being able to grab women’s genitals with impunity.

Trump’s defeated rival Hillary Clinton tweeted her support to the protesters, while former secretary of state John Kerry was spotted in the crowd – a day after leaving office – with his dog on a pink leash.

Celebrities Scarlett Johansson and Michael Moore were among the speakers, and pop diva Madonna made an impromptu appearance on the Washington protest stage to deliver an expletive-laden indictment of the president.

“Welcome to the revolution of love,” the 58-year-old intoned, wearing her own black pussyhat. “To the rebellion. To our refusal as women to accept this new age of tyranny.”

In Boston, where up to 175,000 people demonstrated, fiery Democratic Senator Elizabeth Warren took aim at Trump’s campaign of “attacks” on women and minorities.

“We can whimper. We can whine. Or we can fight back!” Warren said to a loud roar.

Saturday’s rallying cry was heard far beyond America’s shores, with protests held from Paris to Prague, Sydney to Johannesburg, and in some 20 cities across Canada.

One of the largest was in London, where tens of thousands of women, men and children marched chanting “Dump Trump.”

The human tide flooding Washington appeared to dwarf the throngs of Trump supporters in red “Make America Great Again!” caps who had cheered his swearing-in.