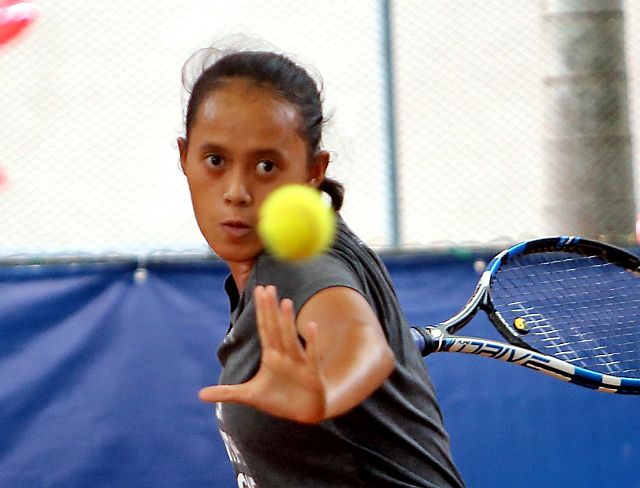 Elizabeth Abarquez travels around 42 kilometers from her hometown in Carcar City to Cebu City whenever there are tennis tournaments here.

She does this so she can hone her skills by playing against the country’s best tennis players.

Yesterday, she got more than what she came for as she not only played against some of the best but also won two titles in the 11th Cebuana Lhuillier Tennis Circuit at the Citigreen Tennis Resort in Barangay Punta Princesa, Cebu City.

The 15-year-old Abarquez pulled off a stunning victory over top-ranked Carlyn Bless Guarde, 6-3, 6-3, to claim the girls’ 16-under diadem.

Abarquez continued her rampage as she teamed up with fellow Cebuana Shyne Villareal to defeat the tandem of Ghylliana Yu and Pherl Corderos, 8-4, and pocket the girls’ 18-under doubles trophy.

“If there are tournaments in Cebu, we always go every day because if we don’t, she will only be able to play during the Central Visayas Regional Athletic Association meet,” said Abarquez’s mother, Bhebie.

The University of the Visayas (UV) ace Abarquez tried to make it a grand slam but failed Guarde exacted revenge with a 7-5, 6-3 victory in the 18-under girls finals.

Despite that, she believes her stint in this tournament was satisfying enough to make up for the long trip from Carcar.

“I’m satisfied with my performance. It was okay,” she said. “Guarde is a very good player.”

In the boys’ 16-under division, it was dejavu as Sultan Kudarat’s Vince EJ Tugade defeated Cebuano Marc Nicole Suson, 7-6 (3), 6-1, to pocket the crown.

It can be recalled that Tugade eliminated Suson on Monday in the boys’ 18-under semifinals, 6-1, 6-2.

Tugade had a chance for a twin kill but he was unable to stop Zamboanga Sibugay’s Jose Maria Pague in the 18-under finals. He lost via a 6-4, 6-3 decision.

In other games, Zamboanga’s Sydney Ezra Enriquez snagged the girls’ 14-under crown with a 6-3, 6-1 win over Minette Bentillo while Nash Agustines defeated John Sonsona, 6-2, 7-5, for the boys’ 12-under tiara.

Read Next
Sanman eyes more fights across PH this year