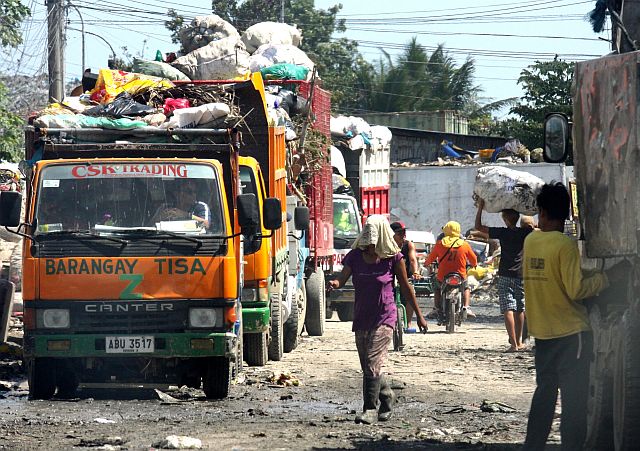 Garbage trucks from Cebu City’s barangays wait in line for their turn to dump their collected waste at the private landfill in Barangay Inayawan, Cebu City. (CDN PHOTO/JUNJIE MENDOZA)

Gabuya, who is affiliated with Bando Osmeña Pundok Kauswagan (BO-PK), has proposed to the Cebu City Council an ordinance which seeks to apportion one hectare of the Inayawan landfill, which was ordered closed by the Court of Appeals (CA) last December, as a city-owned and operated transfer station.

“With (a) city-owned transfer station, the Cebu City government shall have lesser budget and/or expenses for garbage collection … There is a sufficient area in Inayawan landfill that can be used for Cebu City’s transfer station,” read Gabuya’s two-page proposed ordinance.

During the council’s session last Tuesday, the proposal was referred to the committee on laws for review.

But as early as now, the proposal has already raised eyebrows of some Team Rama councilors who dominate the city council.

Councilor Joel Garganera, who heads the council’s committee on environment, pointed out that the CA had already ordered the closure of the Inayawan landfill and putting up a transfer station inside it would be like reopening the facility and defying the court.

It was Garganera who filed a petition for a Writ of Kalikasan against the city last year for the closure of the facility.

Councilor Raymond Alvin Garcia, who heads the committee on laws, also said that there is only a “slim chance” that the proposal will be passed and approved in his committee alone.

“I think that is tantamount to reopening the Inayawan landfill. It might be a contemptuous act. We have to respect the decision of the Court of Appeals. I will have to look at it but most likely, it cannot pass in my committee,” he said in an interview yesterday.

He said putting up a transfer station inside the landfill is like circumventing the CA decision.

And since the city is already employing the services of the private hauler, Garcia said looking for a transfer station should already be the problem of the hauler.

But Gabuya defended his proposal, saying that it is not like reopening or dumping again in the Inayawan landfill.

He said that one of their plans would be to transfer garbage directly from one truck to another, which would mean that the trash would not have to be dumped in the transfer station.

“We will make sure that we won’t have to dump. We are still looking for a design for this. What’s important is that the cost of the contract will be lessened,” Gabuya said in a press conference yesterday.

The city currently pays Jomara Konstruckt Corp., the private hauler, P1,375 per ton of garbage that they haul. This already includes the transfer station.

Gabuya said he was told that Jomara pays P200 per ton to the owner of the private transfer station just outside the gates of Inayawan landfill.

This means that if the city can provide a landfill to its private hauler, the P1,375 per ton contract can be reduced by at least P200 per ton.

The Cebu City Environment and Natural Resources Office (CCENRO) will be tasked to operate and monitor the facility.

Gabuya said the Inayawan landfill is the best place to put up a transfer station since it is near the weighing bridge of the city.

Garbage trucks need to be weighed first to know how much volume of garbage they carry.

Yesterday, however, when Cebu Daily News visited the private transfer station in Barangay Inayawan, garbage trucks from Cebu City’s barangays continued to dump in the area.

There was a long line of garbage trucks from the barangays waiting for their turn to dump inside the transfer station where waste pickers could be seen and heavy equipment like a backhoe were arranging the garbage dumped in the area.

Aside from the muddy road leading to the transfer station, the air in the area was also filled with the foul smell from the garbage dumped there.

Meanwhile, there are still some piles of garbage that have not yet been removed by Jomara at the old transfer station established by the city at the South Road Properties (SRP).

In the middle of the clearing at the old transfer station at the SRP, water have also pooled. Despite the lesser garbage, the stench is still strong in the area.

Roberto Cabarrubias, Department of Public Services (DPS) chief, said that Jomara’s equipment accidentally damaged two pipes of the nearby Pilipinas Water Resources Inc. (PWRI), which resulted to the pools of water there.

Cabarrubias said that Jomara assured that they would shoulder the expenses for the repair of the damaged pipes.

“We have to fill the flooded area so the trucks can pass and collect the remaining garbage. Hopefully, we can finish this within the week,” he told CDN.

He estimated that there are still around 500 tons of garbage remaining in the area.

Read Next
Cops’ 2-day tally: 5 dead, 2 nabbed, half a million worth of drugs seized