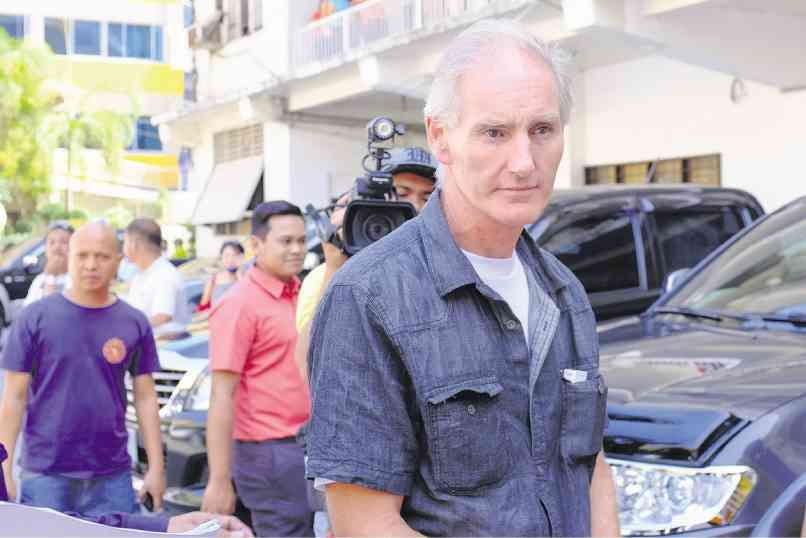 PETER Gerard Scully is being brought to the Lumbia City Jail in Cagayan de Oro where he would be detained while facing charges of child abuse and trafficking in this photo taken on Feb. 20, 2015

Even behind bars, Peter Gerard Scully, the notorious alleged sex predator who brutally sodomized children in Mindanao, continues to communicate with the outside world.

And if that was not enough, Scully is now believed to be operating his nefarious child trafficking business from inside the Lumbia City Jail in Cagayan de Oro, some 15 kilometers away from the city proper, where he continues to insist on getting “special treatment.”

The Australian, believed to have mercilessly tortured children for the benefit of his pedophile clients across the globe in a series of online videos sold for $10,000 per view, also communicated regularly with his girlfriend, Liezyl Margallo, from the confines of his jail cell.

The 23-year-old woman was on the lam to evade authorities who believed that she helped Scully run his gruesome international cyberpornography trade by luring would-be victims, all street children and young scavengers, with a promise of food, education and a roof over their heads.

But Scully and Margallo’s relationship did not end with the suspected pedophile’s arrest.

Scully, even while in jail, is also said to have financed Margallo’s luxurious lifestyle in Cebu, where she lived for more than a year before her arrest last Wednesday.

A number of phone calls and text messages between Scully and Margallo were discovered by the National Bureau of Investigation (NBI) even after the Australian national was arrested in Malaybalay, Bukidnon, in February 2015.

“They definitely continued to communicate with each other. And we fear that Scully is still on top of his online (pay-per-view) services (showing the sexual torture of children),” NBI-7 Director Dominador Cimafranca told Cebu Daily News yesterday.

Margallo’s cell phone was confiscated by NBI agents when they finally caught up with the fugitive on Malapascua Island in the northern part of Cebu.
Pending follow-up operations, its contents remain confidential.

Margallo’s cell phone and laptop will be subjected to forensic examination by the NBI.

Cimafranca said the NBI is on a quandary as to how Scully managed to contact Margallo when inmates are supposedly prohibited from possessing cell phones inside the jail.

“Scully must be enjoying special treatment where he is staying now. Even Margallo admitted that they never lost contact with each other even when Scully was arrested,” Cimafranca said.

Cimafranca said the NBI is starting to monitor Scully’s operations inside the jail to make sure that he will not be able to continue his illegal operations.

Scully and Margallo were accused of forcing young children (ages 1 to 12 years old) to perform sexual acts, torturing them and killing one of the kids in the process.

Cagayan de Oro–based lawyer Alejandro Jose Pallugna, who served as Scully’s lawyer for seven months from the time the accused was arrested, said the foreigner had incessant demands for special treatment in prison.

Scully, he said, wanted “special foods” in prison and an electric fan, among other things inside the jail.

“In a sense, he’s a demanding person,” Pallugna told Cebu Daily News over the phone yesterday.

“At first, he instructed my staff to bring him karne norte (corned beef), pork and beans, eggs and kilos of fresh pork. And then, he said it’s hot inside his cell so he needs an electric fan,” he added.

The requests, the lawyer said, were denied by jail officials.

Pallugna was asked by Scully’s sister in Australia to defend the accused child molester.

He first acceded to the request but later opted to withdraw as Scully’s legal counsel over various disagreements.

“Dili mi magkasinabot. Siya may magbuot kon unsaon pagpadagan sa kaso. Dili na mahimo. Ang abogado maoy nasayud kon unsay angay buhaton. (We just could not agree with each other. He was instructing me what to do. That could not be. As lawyer, I would know what steps we needed to take),” he told CDN over the phone.

Pallugna said another lawyer Adonis Gumahad took over but also did not last as Scully’s counsel.

Scully reportedly still does not have a lawyer at this point in time.

“Scully appears to be an intelligent man. I could say he was well educated. He speaks and conveys his message very well and talks with sense. He looks normal. It’s hard to believe that he’s a pedophile,” Pallugna said.

Pallugna assisted Scully when the latter was arraigned in court in 2015.

The 53-year-old Aussie pleaded not guilty to the charges leveled against him.

“Basically, denial was his defense. He said he did not do anything bad to the kids,” Pallugna said.

Scully was indicted for at least 75 cases that involved 14 girls whom he allegedly molested and tortured.

Concerns, however, were raised on whether or not the cases will prosper without any physical evidence.

Pallugna said that most of the physical evidence against him, including a computer, video camera and memory card, had been destroyed in a fire that razed the Cagayan de Oro Hall of Justice on January 30, 2015, three weeks before Scully’s arrest.

Authorities got hold of the physical evidence against him when they earlier raided his residence in Apovel Subdivision, Cagayan de Oro City, in Sept. 2014.

Another live-in partner of Scully, Carme Ann “Angel” Alvarez, was arrested in that operation.

Pallugna said the prosecution should do its best to prove Scully’s guilt “beyond reasonable doubt” otherwise the alleged pedophile will soon find himself free again.

“There’s a great possibility that the cases against Scully will be dismissed due to the fact that the physical evidence against him were burned down. Those things are necessary to prove that Scully really had a hand in molesting and torturing the victims,” the veteran lawyer said.

“The prosecution should handle the case properly. If Scully gets a good lawyer, there’s really the chance that he can go out of prison,” he added.
But based on his conversations with Scully, does he think his former client was really a cyberporn kingpin?

“That I could not say. Let the law take its course. Let the judge decide,” Pallugna said.

Claiming to be the only daughter of a policeman and a social worker in Cagayan de Oro City, Scully’s girlfriend, Margallo, introduced herself as “Shannon Carpio” to the people she befriended in Cebu when she started to live here in 2015.

Among those she befriended was 26-year-old Juliet Mejares — the caretaker of a posh condominium unit in Barangay Apas.

“She rented there for a month then extended her stay for three more months,” Mejares told CDN on Saturday.

Because she was a good friend of Mejares’ cousin, Margallo was given a discount and was asked to pay only P 8,000 monthly rental for the condo.

At times, Margallo’s payments were late which led her to move to other condominiums and apartments in Cebu City.

Mejares’ cousin earlier told CDN that Margallo had invited friends to an all expense paid trip to Asian cities which would be paid for by her boyfriend, Scully.

Margallo, according to Mejares, is married to a French national working in a “big company in France”, but it was Scully who financed her luxurious lifestyle in Cebu.

In fact, Margallo openly talked about Scully whom she claimed had his own business.

“It was a software kind of business and she said there are many people working (in that industry) who earn big income,” Mejares said.
Each time the young friends hung out in establishments along Mango Avenue in Cebu City, Margallo always foot the bill using money Scully had sent, said Mejares.

The friends did not bother to pry anymore into Scully’s background, trusting that he was in an ordinary “software business.”

None of them would have guessed the gruesomeness of the “software,” Scully sent to his pedophile clients abroad.

In 2015, Margallo also asked Mejares to claim money, sent by Scully, on her behalf through a remittance center in one of Cebu City’s big malls.

“During transactions, she was there and I immediately gave her the money,” Mejares added.

She recalled that she transacted four times in the remittance center.

One of the remittances was sent by a female Australian national believed to be Scully’s sister while the three others were from Filipino men, one of them based in Cagayan de Oro City.

Asked why people were sending her money, Margallo reportedly replied that many people loved and liked her.

Mejares constantly helped Margallo with her money as she claimed to have lost all her government IDs and said her passport was still being processed in Manila.

But months before Margallo moved out of the condo unit managed by Mejares, the two spent a week in the rented unit where Mejares learned more about Scully’s girlfriend.

Inside the condo, Mejares accidentally came across Margallo’s passport and was surprised to see the name “Gina Carpio” on it, instead of Shannon.

Asked why this was so, Margallo reportedly answered, in jest, that just like people in show business, “Shannon” was her “screen name.”

“We had bonding, had local travels and planned a vacation. She even mentioned about international travels,” Mejares told CDN.

The last time Margallo and Mejares saw each other was during last year’s Sinulog over barbecue dinner at the Fuente Osmeña Circle.

They parted ways because Margallo had since gone out with her gym friends who loved to party.

Which is just as well for Mejares who could no longer accept her as friend.

“What she did to those children deserves the death penalty,” Mejares said.

Lawyer John Tanagho, director of the International Justice Mission (IJM) Cebu Field Office, said that since 2012, at least 165 victims of online sexual exploitation, half of whom were aged three months to 12 years old, were rescued by IJM in Cebu.

“It’s incredibly disturbing and very sad. Cybersex is definitely one of the darkest and evil crimes that IJM had seen,” he told CDN.

Tanagho said a number of Filipinos fell prey to cybersex, either as victims or perpetrators, due to factors like poverty, widespread internet access and the capacity to speak and understand English.

“There is internet access here and there. By just using their laptops and mobile devices, they can already livestream sexual abuses either in internet café or within the confines of their homes,” he explained.

Tanagho said they are hoping that the menace of cybertrafficking and sexual exploitation will soon end.

“These are serious crimes that violate Philippine laws. It causes severe trauma on children. That is why the government is serious in trying to end the problem,” he said.