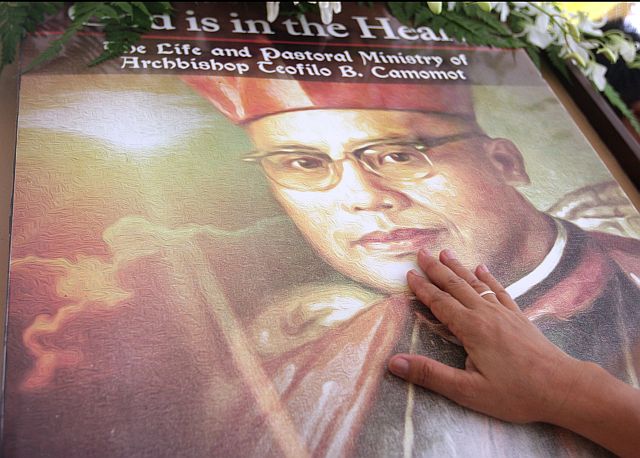 An original songwriting festival will be held on March 3, 2017 in time for the 103rd birthday of the late Archbishop Teofilo Camomot whose sainthood is being processed by the Archdiocese of Cebu.

The activity is spearheaded by the Daughters of St. Teresa (DST), a religious congregation founded by Camomot.
The songwriting festival dubbed as “1st AwiTeofilo2017” will be held at 7:30 p.m. at the DST Compound on Garietta Heights, Valladolid, Carcar City, southern Cebu.

In a press conference at the Archbishop’s Residence on D. Jakosalem Street, Cebu City yesterday, the Daughters of Saint Teresa announced that at least 12 selected original song entries whose lyrics are based on Camomot’s life will be performed by amateur and professional musicians.

“It has always been a dream for us composers from Carcar to compose songs as a tribute to Archbishop Camomot. That is how we started to come up with the songwriting event,” said Yoojin Burgos in Cebuano, the program director of the event.
Tickets are priced at P50, P200, P300 and P500.

Security preparations were already ironed out as 7,000 devotees are expected to witness the event.

Rev. Mo. Ma. Louella Grace Buscato, DST Superior General, said around 40 to 50 security personnel, including the military based in nearby Sibonga town and barangay tanods, will be deployed in the area.

The proceeds of the event will be used to fund the construction of Camomot’s museum where his personal things are being preserved.

The official theme song of Camomot entitled “Lover of God” will also be played for the first time in the event.

To commemorate the works and virtues of Camomot, a mass wedding will be held on February 28 at 9 a.m.

Around 60 couples are expected to be wed during the ceremony to be officiated by Cebu Archbishop Jose Palma.

The Daughters of Saint Teresa have made it their mission to inform the people about Camomot, who is known for his genuine service and generosity for the poor.

“I reflect that this is God’s generous will. Camomot’s apostolate when he was still alive was to go the mountains to serve the people through confirmation and baptizing them. That is what we are doing now, to continue his apostolate,” said Buscato in Cebuano.

In 1955, he became auxiliary bishop of Jaro in Iloilo and became Archbishop of the Archdiocese of Cagayan de Oro in 1958. He died in a vehicular accident in San Fernando town on September 27, 1988 at the age of 74.

In 2010, Archbishop Emeritus of Cebu Ricardo Cardinal Vidal announced that the Holy See had approved the opening of the cause for the beatification of Camomot.

The prelate was known for his simplicity, love of the poor, holiness and extreme generosity.

Vidal also attested that Camomot could bilocate or the capacity to be in different places at the same time. This was the same attribution to other saints like Padre Pio.

If Camomot’s cause for sainthood will be approved by the Vatican, he will become the third Filipino saint, second from the Visayas, and the first Filipino saint who was a member of the clergy.