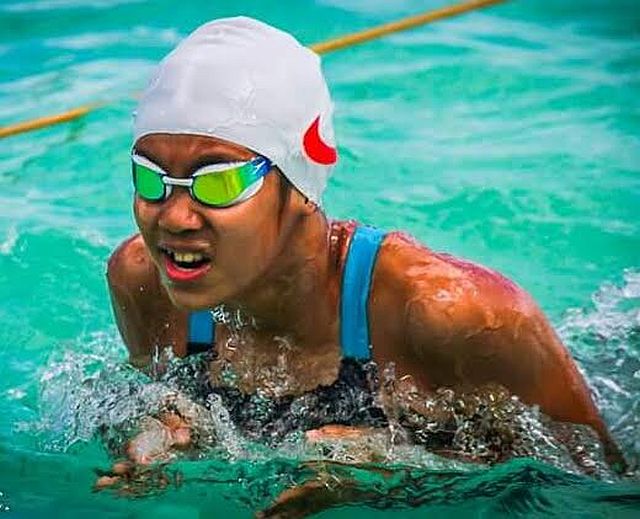 Soguilon in action during one of the tournaments she joined. (CONTRIBUTED)

WITH Kyla Ong Soguilon being named as the Philippine Sportswriters Association (PSA) Junior Athlete of the Year for third straight year, no one can be prouder than her father, Kokoy.

The 12-year-old swimmer from Kalibo, Aklan was on a roll last year, winning titles locally and internationally, which led her to winning the prestigious award for a historic third consecutive year.

Kokoy hopes young athletes could use Kyla’s achievements as inspiration.

“The success of Kyla should be inspiration to other athletes like her,” Kokoy said. “With Kyla’s determination, discipline and training, success was certain to be achieved.”

Asked what message he could give her daughter, Kokoy said, “You made us all proud. God bless you always.”

It was in the Milo event that Soguilon made waves, as she secured 10 gold medals and logged four new meet records.

Highlighting her record-shattering performance was when she erased the 20-year-old record of Cebuana swimmer Lynette Ang in the elementary girls’ 50-meter backstroke event with a time of 33.48 seconds. Ang’s 1996 record was 33.81 seconds.

She bagged a total of 32 gold medals, 12 silvers and two bronze medals in her international stints.

In the Palarong Pambansa, she won four gold medals and two silver medals and was named the Most Outstanding Swimmer and Most Bemedalled Athlete of the meet. She also won three gold medals, a silver and a bronze in the Batang Pinoy National Finals in Tagum City, Davao del Norte.