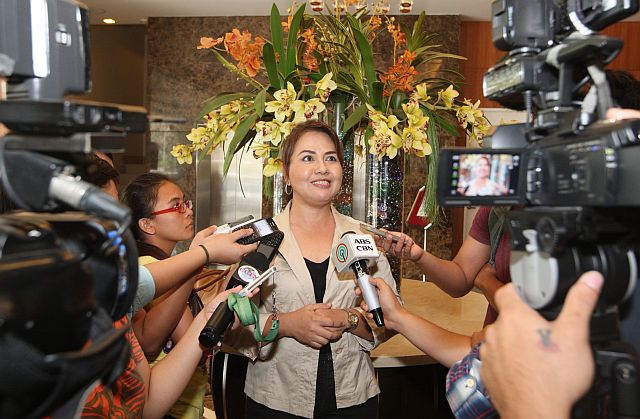 MORENO. In this file photo taken on Sept. 26, 2013, then Aloguinsan mayor Cynthia Moreno faced the media after the Department of Interior and Local Government (DILG) served her preventive suspension for alledged corruption.
CDN FILE PHOTO

After the police tried to serve their warrants of arrest but returned empty-handed, a manhunt operation is now being conducted against the former mayor of Aloguinsan town and seven other town officials who could no longer be found after they were convicted by the Sandiganbayan for graft and corruption.

“(Since) may warrant of arrest, convicted na ’to. Moreno who was convicted by final judgment of violations (by) Sandiganbayan First Division. Mabigat ’to,” Noble said.

(Since there is a warrant of arrest, they are already convicted. Moreno who was convicted by final judgment of violations by the Sandiganbayan First Division. This is a serious case.)

Moreno and the seven other officials are facing imprisonment of up to 10 years and perpetual disqualification from public office for the anomalous purchase of construction materials worth more than P1 million in 2013.

Noble said that last Tuesday, elements from the Aloguinsan Police Station, accompanied by policemen from the CPPO Provincial Public Safety Company (PPSC), served the warrants of arrest to Moreno and the other officials, but they failed to arrest all of them.

Noble said the policemen searched the town’s barangays but could not find the eight convicted officials anywhere, even as he believed that they are still in Cebu.

Noble said the Aloguinsan police, which was directed to lead the manhunt operation, was tasked to talk to the relatives and friends of the subjects as they might be able to convince Moreno and the seven other officials to surrender.

He appealed to Moreno and the others to surrender peacefully and just face their conviction since they have had their day in court.

Cebu Daily News tried to call Moreno, but her number was no longer in service. CDN also tried to call the members of her family, including her husband, incumbent Mayor Augustus Caesar Moreno, but he dropped the call when he was informed that it was from CDN.

Mayor Moreno is himself facing a dismissal order, issued by the Office of the Ombudsman, over another graft case involving the negotiated purchase of about P200,000 worth of food supply from the family-owned bakery. The dismissal order has yet to be implemented by the Department of Interior and Local Government.

The incumbent vice mayor, Ignatius Cesare Moreno, is the eldest son of Augustus and Cynthia. He too could not be reached for comment.

The Sandiganbayan convicted Cynthia and the BAC members in June 2014 after the Office of the Ombudsman in the Visayas found merit in the complaint lodged in 2013 by Felimon Georsua Jr., a former councilor of Aloguinsan, who claimed that the municipality purchased P1.118 million worth of construction materials without public bidding.

Moreno and the others filed a motion for reconsideration, but it was denied by the anti-graft court in August 2014.
Moreno and the others then elevated the matter to Supreme Court, but it also upheld the ruling of the Sandiganbayan. The conviction became final and executory on February 2016.