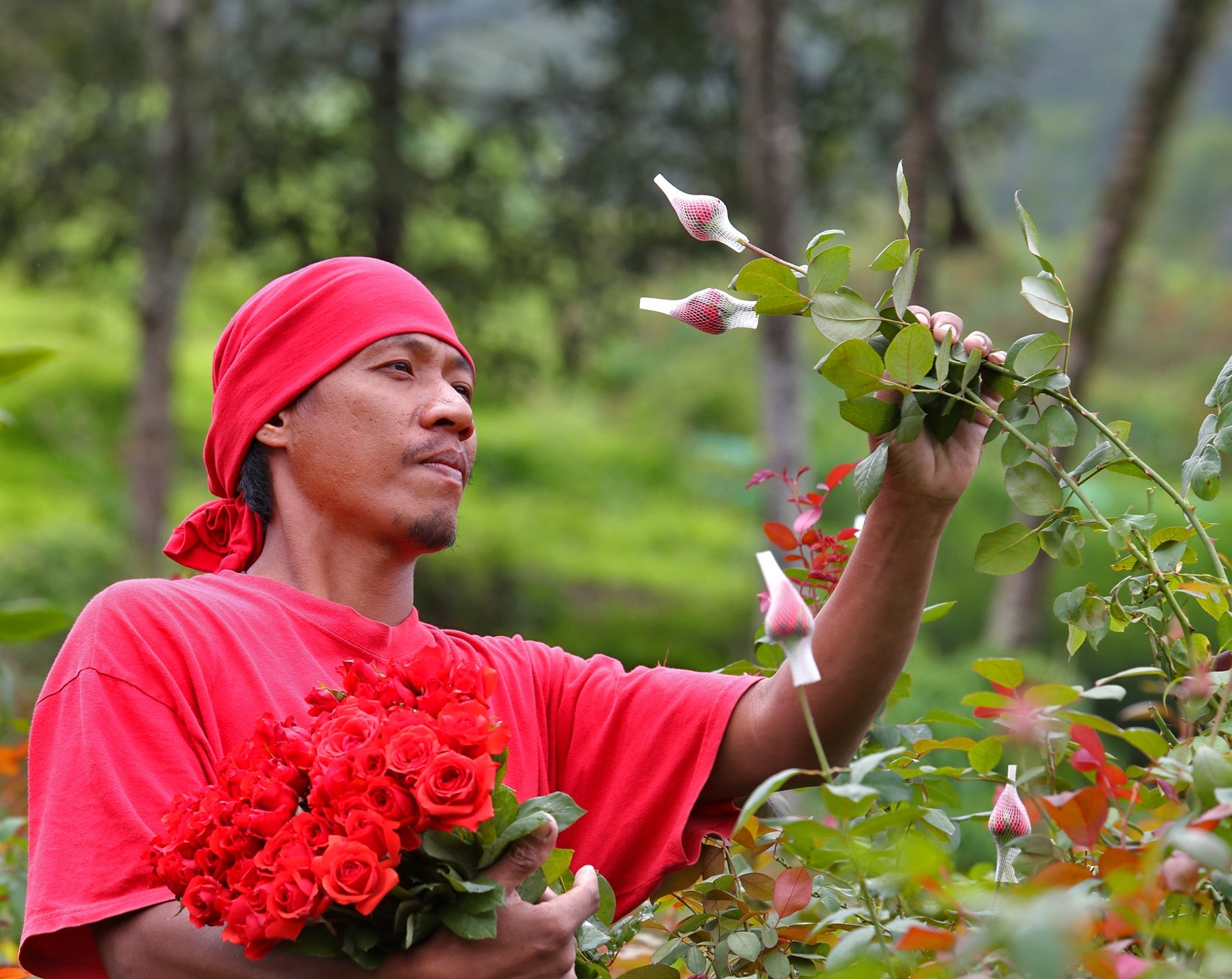 Flower farmer Ariel Lastimosa, starts harvesting roses in the mountain village of Bonbon, Cebu City in preparation for Valentine’s Day on Tuesday. The roses will be brought to Freedom Park where they will sell for more than three times the usual cost.
CDN PHOTO/JUNJIE MENDOZA

Two days before Valentine’s Day, the prices of roses have began skyrocketing by as much as 300-700 percent as the demand for the occasion’s staple is expected to surge throughout the week.

In the hillylands of Barangay Bonbon, Cebu City, flower growers like Elvie and Jun Zamora started to increase their prices of roses last Friday from the regular rate of P50 per dozen during off-peak seasons to as much as P200, P250, and P400 for short, medium and long-stemmed roses, respectively.

The Zamoras, who plant roses in a 1,000- square-meter garden in Sitio Limogmog, said that this year’s prices are higher by as much as P200 to P250 compared to the previous year because of the overall decline in rose production. “A lot of rose farmers had to stop their production for good and resorted to other means of farming because of the shifting demands for roses especially during off-peak seasons.” Elvie said in Cebuano. The couple initially harvested 300 dozens of assorted roses for Valentine’s Day which will be sold at the Freedom Park in Carbon Market. Although All Soul’s Day and the Flores de Mayo celebrations are considered peak seasons for business by Cebu’s flower growers, still, nothing beats Valentine’s Day. “Pero mas dako mi og halin basta Valentine’s Day (Valentine’s Day would earn us the largest profit),” Elvie told Cebu Daily News. Red roses, she said, are always the most in-demand. During last year’s Valentine’s Day, the couple earned P40,000 for just a single harvest from 200 dozens of assorted roses. In Sitio Kanasan, Nestor Abella, 62, who owns the largest rose garden in Bonbon, told CDN that the prices of their roses now range from P40 to P350 per dozen.

Abella’s farm has been divided and leased out to eight rose farmers selling red, white, yellow and pink roses.

Around 100 dozens of roses are brought down from the farm daily to be sold at the Freedom Park in Cebu and shipped to Cotabato in Southern Mindanao and Metro Manila. “We have enough supply for the anticipated peak in demand this month,” Abella said.

Abella expects the rose farmers to earn around P300,000 this month which may still increase if the prices continue to soar alongside the spike in demand. Despite the heavy rains experienced last January, Abella said their harvest is greater this year compared to the previous year.

Read Next
DILG brings federalism discussions to the barangays