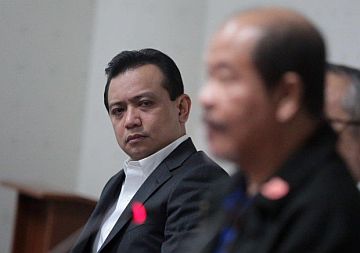 Sen. Antonio Trillanes IV listens to SPO3 Arturo Lascañas as the former Davao City policeman faces the media and claimed the existence of the Davao Death Squad during a press conference at the Senate on Monday.
/Inquirer.net

Then Mayor Rodrigo Duterte paid members of the so-called Davao Death Squad (DDS) P300,000 after the group bombed several mosques in the province in 1993 upon his orders, a former Davao policeman claimed on Monday.

SPO3 Arturo Lascañas, who claimed to be one of the leaders of the DDS, said he was confirming Edgardo Matobato’s testimony at the Senate that it was the then Davao mayor who ordered the bombing of the mosques.

Matobato, who also claimed to be a DDS member, was a key witness in the Senate committee on public order and dangerous drugs’ investigation into the so-called extrajudicial killings in the country.

The Senate committee on public order and dangerous drugs branded Matobato’s claims as “full of inconsistencies and contradictions” and recommended that he be charged with perjury.

Lascañas said the DDS was divided into three groups and his group was assigned to bomb a mosque along the diversion road of Davao City.
Matobato’s group, he said, was assigned to another area.

While it appears that Lascañas was referring to at least two mosque bombings, records show only one mosque bombing incident after the San Pedro Cathedral was bombed in 1993.

The retired cop said the bombing operations were only halted for fear of a possible Senate inquiry after former Senator Aquilino “Nene” Pimentel Jr. said that there was already anarchy in the province.

Macasaet, he said, was also part of DDS. /Inquirer.net