Veering away from Edsa 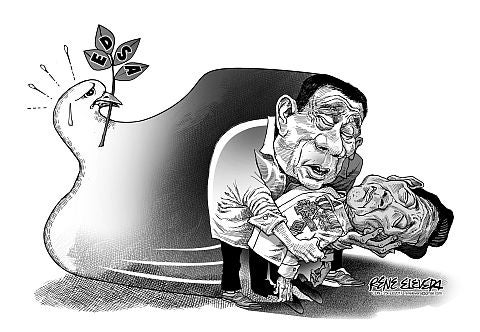 This year’s observance of the 1986 People Power Revolution in Edsa is unlike anything in the past decade or so when past presidents, especially the latest, professed a commitment to the ideals and aspirations set by the peaceful uprising that forced the late strongman Ferdinand Marcos to flee the country.

Now the winds and atmosphere have changed, and the sitting president not only allowed the discreet burial of Marcos at the Libingan ng mga Bayani but also showed little interest in attending yesterday’s activities to commemorate the event in deference to the Marcoses whom he showed public support to.

More than that, President Duterte had allowed his supporters to mount rallies today on the 31st anniversary of the People Power Revolution and tomorrow as their own “show of force” in response to the previous week’s “Walk of Life” rally staged by the church.

Why the President’s supporters would have to mount these rallies is open for discussion though last we heard, the organizers said the rallies were intended as their own way of commemorating People Power.

They were basically echoing the Palace line that the Edsa Revolution is more of a time to reflect on change than a call for change of political leadership since the President did promise and is effecting change through his governance and war on drugs.

That call for change, they suspect, emanates from those celebrating the Edsa Revolution, namely those still allied with the fragmented and decimated Liberal Party (LP).

A court order for the arrest of Sen. Leila de Lima, the President’s staunchest critic and an LP member, is indicative of the deep-seated distrust and suspicion felt by the President against the party which had entered into an alliance with the PDP-Laban to form Duterte’s super majority in Congress.

If they were truthful about their public pronouncements of supporting the Edsa Revolution’s call for democratic change, they wouldn’t need to hold rallies in support of the President who feels that every question or criticism against his administration is a clarion call for his ouster.

Which is so far out of orbit as far as the majority of the public is concerned as seen in the surveys which the supporters tout as evidence of the President’s continuing popularity with the masses.

What they truly fear are the ghosts of the past, the executions, allegedly ordered by Duterte during his decades-long tenure as Davao City mayor, of suspected criminals as part of his war on crime and whose methodology is now being practiced on a national scale.

That and the President’s continuing loyalty to the Marcoses keep him from honoring the memory and legacy of the Edsa Revolution, which is now being shared by his followers.

Read Next
Edsa at 31: Rape and vengeance