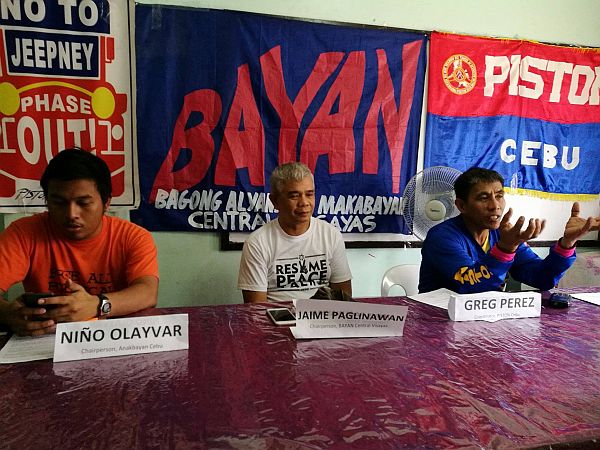 Greg Perez, coordinator of Piston Cebu, announced during a press conference yesterday that 80 percent of public transportation in Metro Cebu would be affected.

“We are one with our group in Manila as we oppose the phasing out of 15-year-old jeepneys,” Perez said in Cebuano.

The “Tigil Pasada” will start at 4 a.m. until 3 p.m. on Monday followed by a protest rally in front of Land Transportation Franchising and Regulatory Board (LTFRB) 7.

Glenn Antigua, operations chief of the Traffic Enforcement Agency of Mandaue (Team), said should the number of stranded commuters be higher than expected, coasters and dump trucks will be deployed to accommodate them.

Antigua said Romeo Armamento, vice president of the National Confederation of Transportworkers Union (NCTU)–Visayas informed him that the group will meet today to finalize their decision whether or not to join the nationwide strike.

“We have already made preparations in case the group decides to join the strike on Monday. The reserved vehicles will be deployed beginning 5 a.m. onwards. We are also anticipating that a surge of commuters will be out in the streets very early on that day,” Antigua said.

Some of the vehicles will be on standby at the Mandaue City Hall while others will be deployed in areas in the city where flow of commuters is high.

Meanwhile, Piston Cebu sent letters to schools and colleges in Metro Cebu informing them of their activity, which could affect public transportation.

They apologized to the riding public, saying they just wanted to express their opposition to the government’s plant to phase out old jeepneys.

(Jeepney drivers will lose their livelihood. The majority of our riding public will also be affected since they usually rely on jeepneys.)

Perez and his group believe that modernization of public utility vehicles will pave the way for big corporations to control the mass transportation.

“They just want the jeepneys to be privatized which is more advantageous for the big capitalists,” Perez said.

Fifteen-year-old jeepneys and beyond will not be granted a “Certificate of Confirmation” as “for hire” and will not be allowed to continue operating.

These will be replaced by electric jeepneys. Brand new vehicles must come from Land Transportation Office (LTO) suppliers and should be equipped with global positioning satellite (GPS) and automated fare collection device.

The jeepneys and operators should also be with private corporations under the Fleet Management Program.

Reynaldo Elnar, assistant director of LTFRB-7, said, “We encourage transport groups to submit counter proposals and we will forward this to our central office instead of holding activity that will affect public transport.”