Unplayed theme song did it 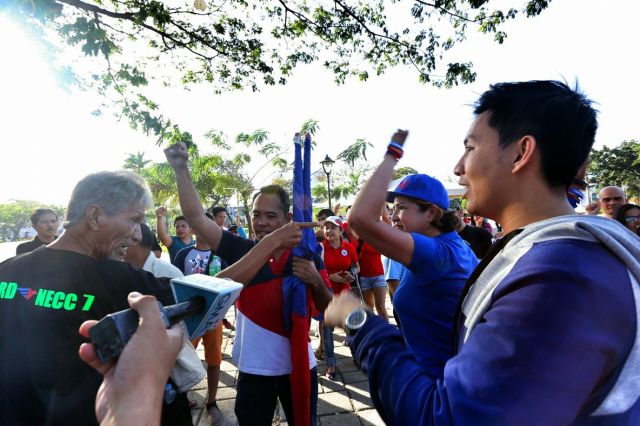 Igmefio Sallente of MRD group (left) exchange heated arguements with Dr. Rowena Burden (right) after the Federalism theme was not played during the rally.

It was an unplayed theme song that triggered the argument that erupted among supporters of President Rodrigo Duterte just minutes after they ended their pro-Duterte rally at Plaza Independencia in Cebu City on Saturday afternoon.

Igmedio Saliente, chairman of the Mayor Rodrigo Roa Duterte (MRRD) group in Cebu, confronted and pointed finger at Dr. Rowena Burden, the lead facilitator of ‘Ipadayon ang Kausaban’ rally, over the failure of the organizers to play their group’s theme song called ‘Pederalismo’.

Rudy Flormata, the vice chairman of MRRD, told reporters that they were already offended when they were told that ‘Pederalismo’ would only be played at the end of the program because “who would listen to (the song) if the program is already done?”

He said they got angrier when even after the rally and its program ended at past 4 p.m on, the song was still not played even as Duterte’s supporters were already starting to disperse.

‘Pederalismo’ was launched along with People’s National Movemement for Federalism (Penamfed) and Mamamayan Ayaw sa Iligal na Droga (Masamasid) at the Cebu Provincial Capitol two weeks ago by MRRD.

During the rally, songs such as ‘Magkaisa’ and ‘Bayan Ko’ were repeatedly played.

“I just wanted to clarify that we don’t want any trouble here,” Flormata said.

But a woman in a black shirt was unable to hold back her emotion and yelled at Burden’s group, saying “Naka minus lang gyud mo namo!” (You are all looking down on us!).

Burden, sought for comment, said Saliente, by his action, was embarassing the president.

Burden also pointed out that “MRRD (has) split into two fractions” and she hoped they would settle their own problem.

Burden, who is not a member of MRRD, also emphasized that all groups supporting President Duterte were all welcomed during the rally.