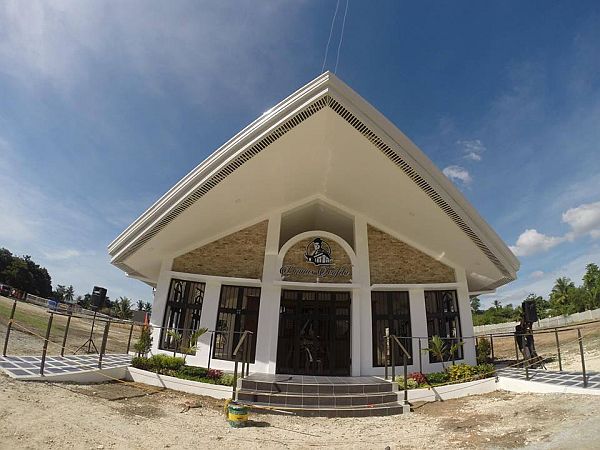 The imposing facade of the Domus Teofilo stands against the sky in Barangay Vallodolid, Carcar City.

As the late Archbishop Teofilo Camomot’s beatification bid rolls out, the Archdiocese of Cebu has opened a museum in Carcar City that houses the personal belongings of the beloved prelate.

The museum stands on a vacant lot acquired by the Daughters of St. Teresa (DST), the congregation established by Camomot, in Barangay Valladolid, Carcar City.

It is located a hundred meters away from Camomot’s grave site and chapel.

A single bed where Camomot used to sleep is the centerpiece of the museum, which has yet to be filled with his other personal belongings.

It took about six months to build the museum with the help of benefactors who requested not to be named, said Fr. Mhar Vincent Balili, the vice postulator for Camomot’s cause for sainthood.

Of the eight galleries that will be put up to depict the life of the late Cebuano archbishop, Balili said only one has been set up so far.

“The other items like his books, vestments, typewriter and write-ups will be displayed in the coming days,” he said in an interview.

The museum was designed by Architect Arnold Saballa and constructed under the supervision of Fr. Brian Brigoli, chairman of the Cebu Archdiocesan Commission on Culture and Heritage.

Thousands of people trooped to the DST compound in Carcar City last Friday as the archdiocese celebrated the 103rd birthday of Camomot.

Archbishop Emeritus of Cebu Ricardo Cardinal Vidal presided over the Mass in the morning together with Cebu Auxiliary Bishop Dennis Villarojo.

Fr. Samson Silloriquez, the Rome-based postulator for Camomot’s cause for sainthood, was also present along with two other bishops, Christian Vicente Noel and Patrick Parcon.

On the evening of Thursday, the archdiocese wrapped up the diocesan process which included gathering testimonies from people who had a close encounter with Camomot as well as documents to prove that the late archbishop practiced heroic virtues that would qualify him to become a saint.

Fr. Silloriquez of the Order of the Augustinian Recollects will bring all the documents to Rome on Tuesday and will submit them to the Congregation for the Causes of Saints which will either affirm or deny Camomot’s road to sainthood.

It was the DST, a religious congregation which Camomot founded, which earlier petitioned for the opening of a cause for beatification and canonization of the Cebuano archbishop. 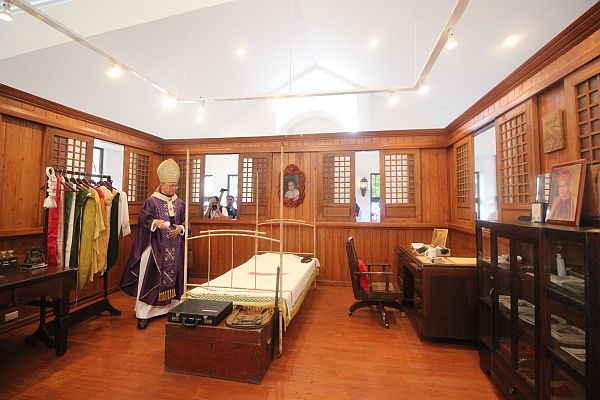 Cebu Archbishop Jose Palma blesses the bed and other
belongings of the late Cebuano Archbishop Teofilo Camomot inside the Domus Teofilo in Barangay Vallodolid, Carcar City.

On Oct. 15, 2010, Cardinal Vidal, then the archbishop of Cebu, announced that the Holy See approved the opening of the cause for Camomot’s beatification and canonization. A diocesan inquiry was then made.

Since a “cause” for sainthood has been started for Camomot, the late archbishop is called a “Servant of God.”

In his homily, Palma urged the faithful to pray so that Camomot will be included in the pantheon of saints of the Catholic Church.

“When he was alive and even after his death, there are several stories of how he became an inspiration and hope to many people. His life was filled with humility, prayerfulness, and generosity,” he said.

“May we truly become like Archbishop Camomot so that we would also bring inspiration and hope to people,” he said.

The Carcar City native who was fondly known as Monsignor Lolong was known for his exceptional love for the poor.

In some instances, Camomot pawned his episcopal ring and pectoral cross (the large crucifix worn by bishops) and gave the proceeds to the poor. The archbishop would also give away whatever he had to the needy.

The Archdiocese of Cebu ruled that the heroic virtues demonstrated by Archbishop Camomot are worthy of sainthood.