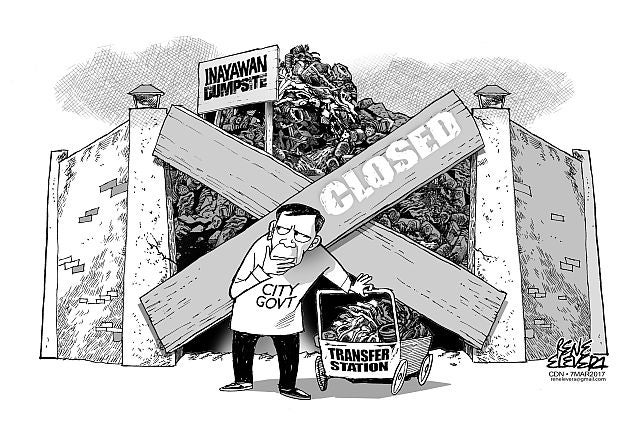 A public hearing scheduled on April 18 on a proposal by Councilor Eugenio Gabuya Jr. to set up a transfer station inside the Inayawan dumpsite should invite maximum participation from city residents if only to allow them to fully express their sentiments on the issue.

And maybe, just maybe, whatever sentiments would be expressed during the hearing would persuade Cebu City Mayor Tomas Osmeña, who undoubtedly set up Gabuya to float his proposal to the council, to reconsider it and instead begin in earnest the complete and total rehabilitation of the dumpsite.

Gabuya/Osmeña’s proposal for a transfer station is, simply and bluntly put, a palusot (excuse), a roundabout way to reopen the Inayawan dumpsite and skirt the Court of Appeals’ (CA) decision to prohibit the city from dumping the city’s garbage there.

In arguing for the transfer station, Gabuya said there’s a world of difference between transferring the garbage there to await pickup by (presumably) the city’s trucks and Jomara Konstruckt for dumping to whatever landfill is out there in Cebu and just dumping the garbage in the dumpsite, never to be transferred someplace else.

Gabuya said the transfer station will be cleaned 24 hours after the garbage had been transferred there for pickup. Granted that the city government makes good on its promise to clean it up, it doesn’t stop anyone from questioning the legality and propriety of the transfer station either at the CA or at the Environmental Management Bureau (EMB).

Considering that Jomara Konstruckt is already renting a garbage transfer station near the dumpsite area, the mayor probably thought it a good idea to set up an additional transfer station to augment the city’s collection efforts.

If the mayor does get his way, the city may just as well be operating the dumpsite anew in keeping with his original plan in the first place which violates the Solid Waste Management Law that required the closure of the Inayawan dumpsite after it exceeded its shelf life since a decade and two years ago.

Unfortunately for city residents, rehabilitating the Inayawan dumpsite doesn’t appear anywhere in Osmeña’s agenda. And that’s a tragedy for those whose health is at risk due to the dumpsite’s continued presence.

It appears that if he can get away with solving the garbage problem cheaply without any long-term plan, then he will go for it regardless of what the surrounding communities affected by its continued operation and the rest of the public says about it.

Which is why stakeholders should let their voices be heard on the proposal. It may not be much to convince the mayor to think otherwise, but at least they will make known their sentiments to him, favorable or not.

Read Next
Osmeña is scaring away investors