How to avoid burning your precious car 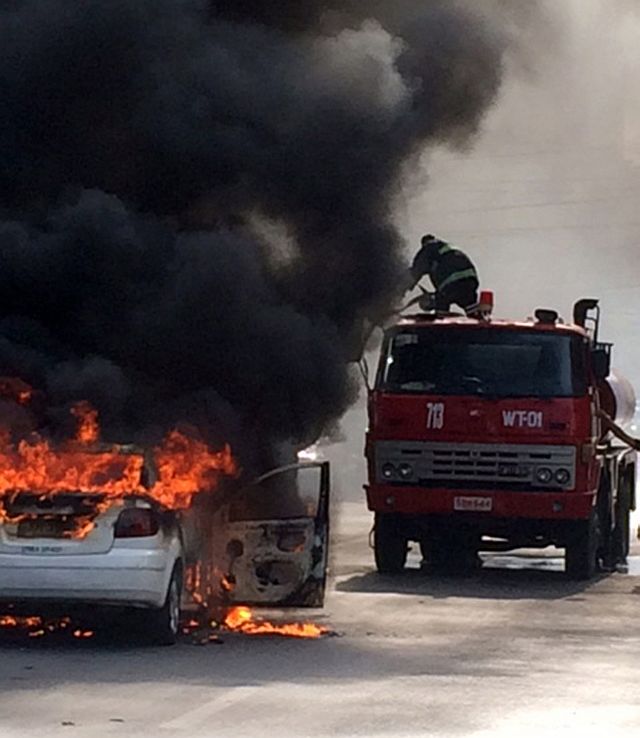 A car catches fire along F. Cabahug St. in Mabolo, Cebu City in this 2015 file photo.

It is heartbreaking to lose a car — especially in a fire — since for most Filipinos, owning a vehicle is a result of years of saving hard-earned money.

But there are ways to prevent car fire, which is not uncommon during summer when the temperature is at its hottest.

Here are some tips that Cebu Daily News gathered to keep you and your precious cars safe:

“When it’s summer, it is really very, very hot. The temperature rises and when a car is exposed to heat, it causes some wiring to become brittle. When brittle wires rub against each other, it causes short circuit. That’s when a car catches fire,” said Leo J. Bathan, technical head of the Gateway Group, one of the country’s biggest car distributors.

Bathan said owners of older cars should pay more attention to the condition of their vehicles.

“Cars that are at least five years old and without proper maintenance are prone to electrical and mechanical problems,” said Bathan, who has been with Gateway for almost three years and has also worked in Qatar and Angola.

Avoid refueling to the brim

Aside from short circuit, improper refueling may also cause a vehicle to catch fire.

“You have to observe the proper way of refueling especially when you go full tank. It should not be filled to the brim,” he said.

Bathan explained that when the fuel dispenser is set on automatic mode, a tick will be heard to signify that enough fuel has been filled.

“But there are some people who will really fill the tank to the point where you can already see the gasoline. That’s very dangerous especially when the O-ring of the fuel lid is already loose as movements may cause the fuel to spill. Gasoline spills are very dangerous because even a small spark may cause it to catch fire,” said Bathan.

Drive on well-paved roads as much as possible

Driving on poor road condition not only increases the risk of mechanical failure, but can also cause fire.

Bathan explained, “Unpaved road causes a vehicle to move a lot. When the wheel falls into a pothole, you may not be able to notice that something has struck some fittings underneath that may cause the fuel to leak or some wires to peel off.”

Bathan warned that those cars powered by liquefied petroleum gas (LPG) are the most susceptible to fires due to too much vibration because installations are done locally, which means it didn’t go through proper quality control.

He pointed out that LPG-powered vehicles have so many fittings. Some of these fittings are inside the vehicle as indicated by the fumes that can be smelled in the cabin.

“Not only are these fumes hazardous to our health, just like gasoline, they are also highly volatile that a little spark or even the frequency of a cellphone can trigger a fire,” he added.

The best way to detect fuel leaks and faulty wirings is to have your car checked regularly, which is referred to as preventive maintenance service (PMS) that must be done in “casa” or dealership service and not by your neighborhood mechanic.

While casa maintenance may be more expensive, Bathan said the customers get better service.

“The advantage of having your vehicles maintained at the casa is that everything is thoroughly checked as a protocol. Unlike in ordinary car shops, mechanics will only do what clients ask,” said Bathan.

He added that mechanics at the casa also give advice to car owners on how to keep the vehicles in tip-top shape.

Load up with emergency tools

Car owners should not also forget to load up with tools that can be used in emergency cases.

“In Qatar, vehicles have mini-fire extinguisher secured under the front passenger’s seat. It is wise to have one,” said Bathan.