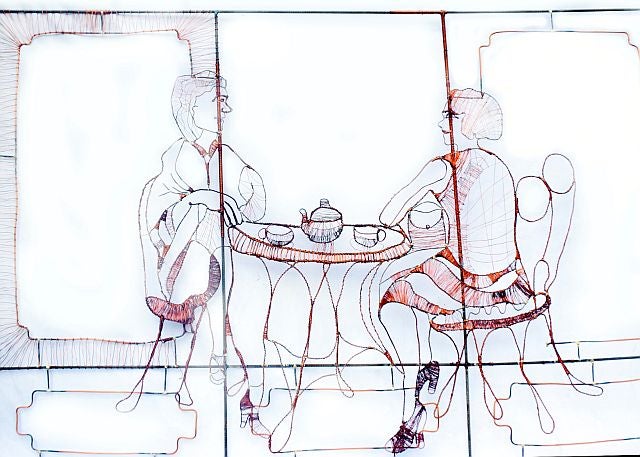 THINK of Cat’s Cradle, a geometric quiz-cum-visual tease usually played by kids using a loop of string wrapped around and between the fingers to form complex patterns. Take it up a notch with multiple hands, say thousands of them, creating even more intricate patterns.

But instead of the fingers, tack tiny nails on the canvas and weave through threads of different colors. This is a simple description of the wire-and-thread mixed media work of Govinda Jean.

Govinda’s life is as spontaneous and intricate as his works. After finishing a pre-medical course, he turned his back on science and pursued the arts to become a mural painter, tribal necklace maker, a henna artist, an actor and ethnic musician, among other incarnations.

Much to his dismay, his ethnic band Kadangyan broke up. Faced with a hard time in Manila after the split, Govinda came back to Cebu and opened a café. When the café didn’t take off, he turned the space into a workshop, gathered surplus materials and turned them into art works. He used the strings that were intended for necklaces in some of these works.

When he had a musical gig in Manila, he brought some of the strings-on-a-canvas mixed media pieces with him. There he joined exhibits and found collectors interested in his “accidentally discovered” medium. Soon he found himselfreceiving orders and accepting commissioned works. (Dean and Deluca commissioned him to the do Art Nouveau inspired “Table for Two,” using bronze wire on an iron frame.)

Still, all these talk of medium might derail us from viewing the deeper art of Govinda, after a quick search on the Internet would show that there are many mixed media artists using thread and wire. But what to this viewer makes Govinda’s works tick are their rhythmic patterns. They look organic and seem to be breathing. The patterns, he says, probably stems from his henna designs. And maybe, we could add, the visual rhythm has to do with his being a percussionist in an ethnic band.

A Photo Gallery of his work 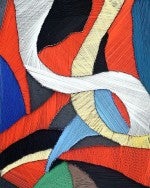 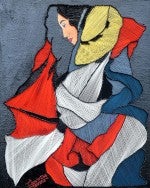 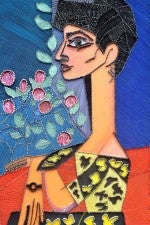 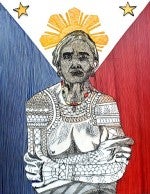