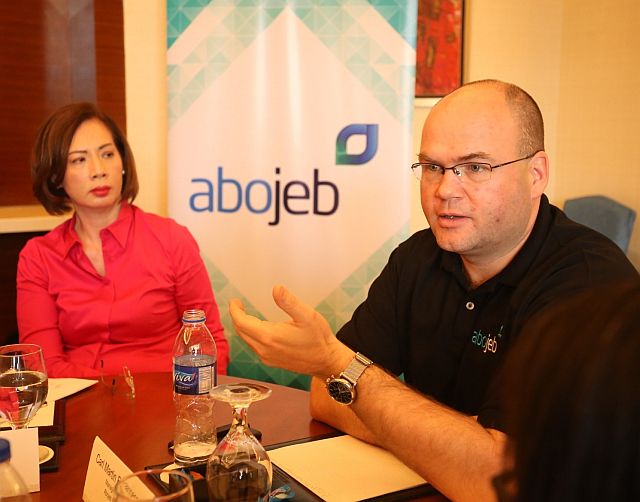 Carl Martin Faannessen, managing director of Abojeb Company, (right) shares his views about the international shipping industry during a roundtable talk with the media in Lapu-Lapu City. At left is Arleen Asuncion, the company’s senior vice president for crewing. (CDN PHOTO/LITO TECSON)

DESPITE the challenges hounding the global shipping industry, the Philippines is encouraged instead to focus on the human element of the industry.

Carl Martin Faannessen, managing director of Abojeb Company, a recognized maritime and manpower services company, said that the Philippines should take advantage of the country being recognized as the most preferred maritime manpower source.

“Filipinos are very welcoming, friendly, are engaged in work, willing to learn, and have high sense of loyalty. The opportunities are immense,” said Faannessen during a media roundtable in Lapu-Lapu City on Monday.

Present hurdles in the industry provides the opportunity to focus on the human element of the industry, which involves investing in crew development, putting weight on wellness, and engaging families.

He said that a ship is a multi-million investment, but it will just be an expensive piece of metal without a human element on board.

Faannessen said the shipping industry has undergone massive fluctuations across all sectors in the last four to five years, with 11 of the 12 biggest shipping companies reporting huge losses in 2016, many of which are teetering on the edge of bankruptcy.

This can be attributed to the decline of offshore markets, which involve the trade of oil and gas.

Faannessen said this is problematic as it puts pressure on people working on board these ships, making them vulnerable to repatriation to their countries of origin.

This has also somehow affected the number of seafarers deployed by the Philippines abroad, dropping 25 percent to 304,329 in 2016 from 406,531 in 2015, partial data from the Philippine Overseas Employment Administration (POEA) showed.

Despite these setbacks, Faannessen, citing the Philippines’ “notorious optimism,” said he is still upbeat on the opportunities presented for the Philippines in the sector.

Faannessen said he sees excellent work opportunities for people seeking senior level positions as there is a shortage in some areas as opposed to non-officer posts or “ratings.”

A sea captain or master earns $8,000 to $8,500 a month, with seafaring contracts lasting six to nine months on average.

But the POEA has seen a surplus in ratings deployed recently at 150,000 seafarers against 100,000 top-level seafarers.

Among the hurdles he cited that may have contributed to this gap was the time it took to be recognized for top-level positions onboard, which takes two weeks abroad but two months and is relatively more expensive in the Philippines.

Faannessen said the only way to narrow the gap would be if and when the industry would find a way to turn these non-officers into officers.

Aside from work opportunities, he said this would also be a time to work smarter and for stakeholders to work together to address industry issues.

Abojeb’s crewing services has a pool of over 12,500 seafarers with 8,500 on board at any given time, approximately 30 percent of which are from Cebu.

Arleen Asuncion, Abojeb senior vice president for crewing, said that 80 percent of non-marine crew or those that go on cruise ships are from here as well.

“They have good English, better pronunciation and communication (than their counterparts), and are of high quality. Most of them are even hired for management level positions,” she said.

The company’s retention rate is at 85.7 percent, which Asuncion said is higher than the 80-percent industry standard.

Despite the challenges, the company sees a silver lining in the continued growth of the world fleet, which would mean an increased requirement for skilled and competent seafarers.

Established in 1982, the company traces its roots to a joint venture between the Aboitiz Group of the Philippines and the Jebsens Group of Norway.