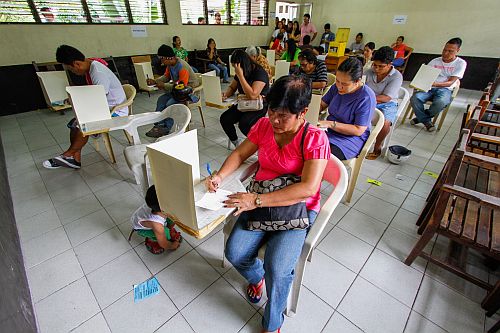 Talks about possible postponement of the barangay elections scheduled in October this year will have no bearing in the Commission on Elections (Comelec) until a law will be enacted declaring its postponement.

Lawyer Lionel Castillano, Comelec Cebu provincial supervisor, said this amid President Rodrigo Duterte’s earlier statement on postponing the barangay elections during first general assembly of the League of Municipalities of the Philippines last Tuesday at the Manila Hotel.

Duterte cited how the nation’s elections, a vital component of a democratic country, could be marred by narcotic politics as the reason for the postponement of the activity.

Castillano, however, said that their office would be following the law and whatever would be decided on what to do with the elections.

For now, he said they would continue with the voter’s registration which would end on April 29.

The barangay elections was supposed to be held last year but it was postponed and rescheduled this October.

Rep. John Peter Calderon (Cebu 7th district), when sought for his reaction about the possibility of the election postponement, said that he could not comment on the topic as it had never been brought up.

Rep. Gwendolyn Garcia (Cebu 3rd district), said that she trusted Duterte’s decision, whether it would be to postpone the barangay elections or not.

Rep. Benhur Salimbangon (Cebu 4th district), for his part, said he favored the holding of the barangay elections this year, but he would totally support Duterte’s decision if he would choose to postpone it.

“The President had already discussed about the influence of drugs and the percentage of the barangays affected by drugs,” said Salimbangon in Cebuano.

However, Cebu City Mayor Tomas Osmeña said he saw no problem if the barangay elections would be delayed for a month, but he was against postponing it. /With Correspondent Inna Gian Mejia

Read Next
Consul: No hold order against seven Koreans, they have right to travel