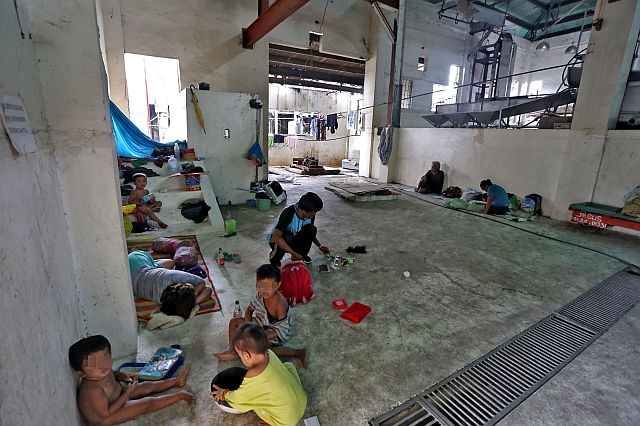 The Cebu City government rounded up street dwellers and housed them in the old abattoir building as part of the cleanup for the summit meetings of the delegates of the Association of Southeast Asian Nations. (CDN PHOTO/JUNJIE MENDOZA)

WITH the ongoing summit meetings of the Association of Southeast Asian Nations (Asean), around 100 street dwellers were rounded up by the Cebu City government and placed in the old building of the Cebu City abattoir.

The roundup, called “rescue,” was done last Sunday and Monday night, just before the Asean summit started their meetings in Cebu City.

Cebu City Department of Social Welfare and Services (DSWS) head Lea Japson said they have been rescuing street dwellers since last year as part of the anti-mendicancy program of the city.

Japson said that the DSWS gave food packs to the families and will continue to give them in the coming days.

(We have been rescuing them since last year, but this time we added some activities for them like tree planting and orientations so they will not leave the area.)

The street dwellers were housed in the old building of the city abattoir in Barangay Mabolo. Some of them claimed they were not given food, which is why they left the building.

Japson denied this and said that they had been feeding the street dwellers and continue to do so.

(Today, houseparents will cook for them. This is just one program for the Asean, but the rescue has been in place since last year when I assumed office.)

Andres Capili was among the street dwellers rounded up near the Metropolitan Cathedral Sunday night.

He said he had been living in the streets for around eight months and this was the first time he was rescued.

(I am okay to stay in the abattoir. It’s better to have a shelter.)

Cebu Daily News found out that there were already 13 street dweller families living at the abattoir since January.

The 13 families were rounded up a week before the Sinulog Festival and opted to stay in the abattoir.

Meanwhile, during the second day of the Asean summit meetings, floods caused traffic congestion, especially in the areas where the delegates were supposed to pass.

Police Regional Director Noli Taliño asked the help of the local governments to make available suction pumps to hasten the clearing of the streets of floodwaters.

He also instructed the traffic and road security teams to determine other possible routes that would avoid the flooded areas.

Read Next
MON FIGHTS BACK