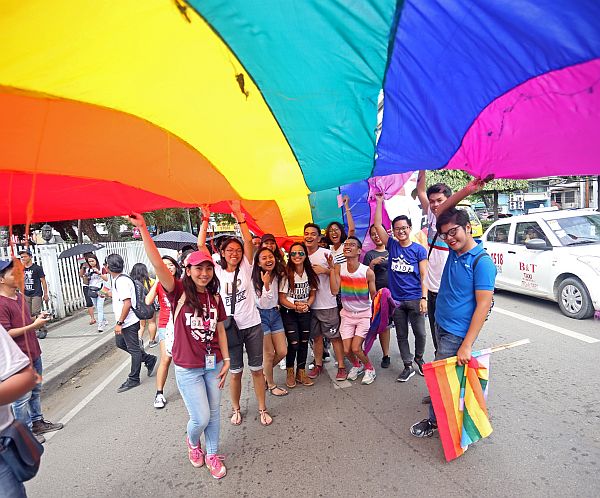 The group UP Pride supports the Lesbian, Gay, Bisexual Transgender and Queer community in a walk from Gorordo Avenue to the Capitol ground.
CDN PHOTO/LITO TECSON

On its second year, Cebu Pride March is not only calling for acceptance of the Lesbian Gay Bisexual Transgender and Queer (LGBTQ) community but also for the enactment of the Anti-Discrimination Bill.

Around 100 LGBTQ members, advocates, supporters marched from Gorordo Avenue to the grounds of the Cebu Provincial Capitol in Cebu City for Cebu Pride March 2017 yesterday afternoon.

The event was spearheaded and founded by the University of the Philippines Cebu Pride (UP Pride), which is an LGBT-centric, student organization.
The LGBTQ community also marked the celebration of Pride Week in Cebu by draping the balcony of the Cebu Provincial Capitol with the rainbow flag.

UP Pride Vice Chairman Chelsea Nadalos told Cebu Daily News that Cebu Pride March was initially created for members of the LGBTQ to express their sexuality “…and let them feel that they are accepted and safe.”

“But we have a goal for this year which is to support the passage of the Anti-Discrimination Bill to create a LGBT-friendly environment,” said Nadalos.

Majority of the participants of yesterday’s Cebu Pride March were students from different schools and universities.

“Most of the students here in Cebu still face difficulties on coming-out. They’re looking for ways to come-out and express in a safe way that’s why there’s a pride march,” stated Nadalos.

It was the first pride march for Marbs Alvarez, who identified himself as gay. The 20-year-old stu dent from Southwestern University said it was a “loud and proud” moment for him.

Nadalos added that Cebu Pride March 2017 also serves as means on advocating the passage of the Anti-Discrimination Bill given that members of the LGBTQ are still not treated fairly and equally these days.

“Especially in schools and universities here in Cebu. Some of their policies prohibit cross-dressing. There are also those which do not allow enter school premises if their hair is colored or not trimmed accordingly to their rules,” said Nadalos in Cebuano.