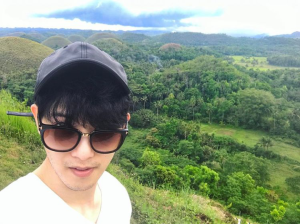 SOUTH Korean artist Lee Jong-Hyun, the lead guitarist and vocalist of the rock band CNBLUE has taken some time off from work, as he is currently enjoying his vacation in Bohol.

Based on his Instagram, Jong-Hyun visited some of the best-known places in the province, taking some snaps of a beach front, which fans were quick to identify that it was in Panglao, a photo of the Loboc river, Bohol’s tarsier and a selfie with the signature view of the Chocolate Hills.

He was spotted together with fellow artist Jung Jong Young, as the latter also shared photos of them together, enjoying a boat ride.

He spent his vacation in Bohol, despite the special travel advisory issued by the Foreign Ministry of South Korea, urging its citizens to postpone their trips to the province, citing “public insecurity” due to the continued clash of the police and the military against the suspected members of the Abu Sayyaf Group.

With the recent clash in Inabanga, Lee Yong-Sang, South Korean Consul and police attache, told Cebu Daily News, in a text message that the travel advisory was extended, specifically in Inabanga and places nearby, including Buenavista, Clarin, Tubigon, Sagbayan, Danao and Carmen.
The new advisory took effect yesterday.

Aside from being a musician, Jong-Hyun was also featured in the fantasy drama “Orange Marmalade,” where he plays as a vampire. He also joined the fourth season of the Korean reality show “We Got Married,” where he got paired with actress Gong-Seung-Yeon.

Jong-Hyun is currently on vacation after promoting their recent album, 7°CN with title track “Between Us.”

He will be flying back this July 8 for CNBLUE’s Asian Tour, visiting six countries, including the Philippines.