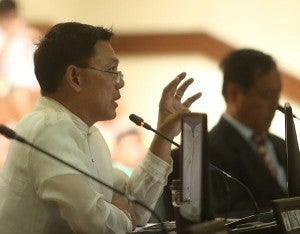 Cebu City officials argued for and against a proposed ordinance to build a one-hectare garbage transfer station at the closed Inayawan dumpsite in yesterday’s City Council session.

Former councilor Roberto Cabarrubias, who now heads City Hall’s Department of Public Services (DPS), said the city can save P3.15 million a month from their garbage collection costs or P37.8 million a year.

The Cebu City Environment and Natural Resources Office (CCENRO) said while they support the ordinance proposed by Councilor Eugenio Gabuya, it should be done as part of the post-closure rehabilitation of the Inayawan landfill.

Former councilor and now City Environment consultant Nida Cabrera said operating a transfer station inside the defunct Inayawan landfill can be included in the post-closure plan for the facility.

“Post-closure land use plan may include the conversion of the site into an eco-park, recreation area, or other uses, such as the operation of a transfer station, materials recovery facility (MRF), and waste-to-energy (WTE) facilities consistent with existing guidelines,” Cabrera said in a separate position paper presented to the council.

She said the city’s Bids and Awards Committee (BAC) already approved the terms of reference (TOR) for the bidding for a consultant that will formulate the closure and rehabilitation plan for the Inayawan landfill.

The closure plan will detail several aspects including the physical closure and rehabilitation plan, the post-closure management plan, post-closure monitoring plan and post-closure land use plan for the Inayawan landfill.

Republic Act No. 9003 or the Ecological Solid Waste Management Act of 2000 defines transfer stations as “facilities used to receive solid wastes, temporarily store, separate, convert, or otherwise process the materials in the solid wastes, or to transfer the solid wastes from smaller to larger vehicles for transport.”

Councilor Joel Garganera, who heads the council’s committee on environment, argued that setting up a transfer station would violate a ruling by the Court of Appeals (CA) last December to permanently close the Inayawan landfill.

Garganera, who filed a Writ of Kalikasan at the CA last year, said he will file a motion at the CA asking them to seek updates from the city government on their closure plan for the landfill.

But the Cebu City Legal Office said the proposed ordinance does not go against the CA order since it only prohibits the “dumping or disposing” of solid waste in the landfill.

They said dumping or disposing inside the landfill means it would be the final destination of the garbage.

Inayawan barangay chairperson Lutherlee Ignacio-Soon said they should be included in the operation of the transfer station. She said the city should help the barangay by repairing the road leading to the landfill.

Gabuya said the city will repair the road and involve the barangay officials in operating the transfer station.