Why the Abu Sayyaf targeted Bohol 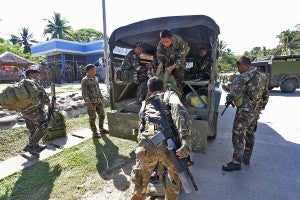 Additional military forces arrive in Clarin, Bohol. Captain Jojo Mascariñas of the 302nd Infantry Brigade in Bohol says that members of the Abu Sayyaf are still in Bohol and may blend with the community to escape.
CDN PHOTO/JUNJIE MENDOZA

CAGAYAN DE ORO CITY — The appearance of the Abu Sayyaf Group (ASG) in Bohol was not the first time the terrorists wanted to go to and sow terror in that part of the country.

In 2001, Abu Sabaya, born as Aldam Tilao and one of the key leaders of the terrorist group until he was killed in 2002, planned to conduct kidnapping operations in Cebu and Bohol using their fast motorboats that could negotiate the seas between Basilan and the Visayas in just “a matter of hours.”

This plot was revealed by former Philippine Navy chief Alexander Pama, who, in a recent Facebook post, said they learned about the plot and immediately formed a task group called Stingray composed of three navy boats to counter it.

“We, TG Stingray, were waiting for them to come up particularly in the Bohol-Dumaguete-Dipolog corridors,” Pama narrated.

Pama said Sabaya was able to sense their presence and did not pursue their plan.
“We never got to engage them as subsequent intel(ligence) reports said they decided against doing it,” Pama said.

Why attack Cebu and Bohol now?

Recent events like the agreement between the Philippine, Indonesian and Malaysian governments have allowed naval boats from these countries to escort barges laden with coal destined to power plants in Cebu and Mindanao.

These slow-moving coal barges were frequent targets by the Abu Sayyaf bandits who board these ships and kidnap its crew for ransom.

Jakarta Globe, a leading Indonesian newspaper, reported that the shipping firm Patria Maritime Lines paid a US$1-million ransom for the safe release of their 10 sailors held hostage by the Abu Sayyaf.

The targeting of these coal barges by the Abu Sayyaf became a huge problem that Filipino power companies had to resort to diverting their ships to take a longer route from East Kalimantan to the Visayas and Mindanao.

Aboitiz Power Corporation said their barges were instructed to use the longer route via Celebes Sea to their power plants in Davao in Mindanao.

The agreement on armed escorts changed all that.

Indonesia’s Defense Minister Ryamizard Ryacudu told Seatrade Maritime News that the agreement allowed their navy ships to escort the barges until they reached Philippine waters where Philippine Navy gunboats would escort them to their destination and back.

The arrangement forced the Abu Sayyaf to look elsewhere; and Cebu and Bohol, teeming with tourists, were ripe targets.

“Cebu and Bohol security is lax. The authorities there are not familiar with the Abu Sayyaf,” said a military official.

The death of Abu Sabaya in the hands of elite Philippine troops and the relentless operations conducted against the kidnap-for-ransom group gave rise to smaller but more dangerous terrorist groups in 2002.

These groups are so small that it is said each of them only have less than 15 members but with links and their allegiance pledged to the Islamic State of Iraq and Syria (ISIS) and Jemaah Islamiyah.

The Philippine military calls them the Khilafa Islamiyah Mindanao or the Black Flag movement.

The Maute terror group in Lanao del Sur, a relatively newcomer, also falls under the Dahwatul Islamiyyah Wilayatul Mashriq but operates outside its influence.

Renierlo or Reneer Lou Dongon alias “Rolly Unting” was a member of the Ansar Khilafa Philippines and was trained in explosives handling in Lanao del Sur, according to Ruben Banlaoi, PIPVTR chairman.

Dongon was caught in a joint military-police checkpoint with a senior police officer, Supt. Maria Cristina Nobleza, in Clarin town of Bohol last Saturday, April 22, foiling their attempt to rescue the remaining Abu Sayyaf members being pursued at that time by government troops.

Banlaoi said he has several pictures showing members of the group holding training in Lanao del Sur and elsewhere in Mindanao.

One of the pictures shown by Banlaoi to reporters was a smiling Dongon, raising an M16 rifle with alleged terror leader Ustadz Usman Abdul Najid. The picture was supposedly taken somewhere in Lanao del Sur in 2011.

The terror group also habitually posts videos of their training in Youtube as part of their propaganda campaign to gain adherents in Mindanao.

Dongon, who is a “Balik Islam” (return to Islam) convert, and his family have a long relationship with the terror movement and were credited by the military for unifying the different factions.

One of his sisters, Zainab, was married to Southeast Asia’s most-wanted terrorist Zulkifli bin Hir also known as Marwan, who was killed in January 2015 in Mamasapano town in Maguindano, an infamous Philippine National Police operation that resulted in the brutal death of 44 Special Action Force (SAF) men.

Zainab was originally the wife of Khadafy Janjalani, the Abu Sayyaf leader in 1998 who was killed by government troops in 2003.

Zainab is now reportedly living with her children somewhere in Lanao del Norte.

Dongon’s other sister, Aminah, was married to Jainal Antel Sali also known as Abu Solaiman, an engineer who masterminded the 2004 SuperFerry bombing, considered the worst terrorist attack in Asia at that time.

His other brothers and sisters also have major links with other terror leaders and the Rajah Soliman Movement, a group made up of Balik Islam converts.

Police arrested Dongon in Barangay Fort, Marawi City, in May 11, 2011. Police allegedly found a sizable cache of bomb-making materials in his possession.

However, Dongon and his co-accused, Emran Napeh, who is also known as Napeh or Mideh, were released several days after their arrest by a judicial court in Marawi City on a technicality.

Here, the murky world of military intelligence and counterintelligence came into the picture.

Sources said military and police intelligence were interested on Dongon because of his “closeness” with Marwan.

“The intelligence community felt they can use Dongon to get Marwan,” a source privy to the operations said.

To do this, the source said the intelligence community ordered police Supt. Maria Cristina Nobleza to “get close and soften” Dongon to give up Marwan.

But the operation was overtaken by events when Marwan was killed in Mamasapano, Maguindanao, in January 2015.

Not only was Dongon proven to be a hard nut to crack, Nobleza was instead co-opted by Dongon.

“Without the knowledge of her superiors, Nobleza chose to extend her relations with Dongon instead of cutting it off,” the source said.

Early this week, Nobleza, now in police custody in Camp Crame along with Dongon, admitted to Dela Rosa that she married Dongon in Muslim rites.

It was as a couple that the two went to Bohol last week supposedly not just to rescue the ASG members trapped on the island but possibly to conduct a bombing mission as evidenced by the components for explosives found in the apartment that the couple rented on Panglao Island in April 17, just two days before the holding of an Association of Southeast Asian Nations (Asean) pre-summit trade meeting in a resort on Panglao.

Read Next
Informants get cash reward; hunt on for ASG