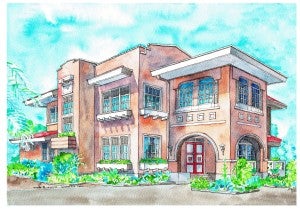 JAPANESE watercolor artist Dr. Kiyoko Yamaguchi lived in Cebu for a year to finish her dissertation on the urban architecture in Cebu during the American colonial period.

She went around Cebu and then down south to the historic city of Carcar and the heritage town of Argao where she fell in love with its people who opened their doors to a complete stranger like her.

With more discoveries and a heightened interest in Cebu, she explored more towns in the northern and southern parts of the province and decided to paint the houses instead of just taking photos of them.

More than a decade later, Yamaguchi came back to Cebu not to knock on the doors of these houses but to launch a book about them.

Titled “Poblacion Houses in Cebu: Urban Architecture in the American Colonial Period,” the book looked into the changesin urban plans and buildings designed and built before and after the administrative transition from Spanish to American colonial rule.

“I hope that through this book, Cebuanos can have a shared memory of the treasures that you have here,” she told an audience composed of reporters, culture and heritage experts, members of the academe, owners anddescendants of houses featuredin the book.

Yamaguchi was part of the cultural exchange program Ship for Southeast Asian Youth Program in the late 90s were she first visited the Philippines and stayed with a family in Pampanga.

Her subsequent travels brought her to many towns and cities in Luzon but it was in Cebu that she found the subject of her study.

“I have never seen a culture like this before. There are many Filipinos who are friendly but the people of Cebu are especially friendly. They’ve opened doors to a total stranger like me and told me stories about the houses and their great grandparents who were the first people to live in them,” she said.

The book launching was held at the newly-updated Casa Gorordo Museum, which is under the care of the Ramon Aboitiz Foundation Inc. (RAFI).

“This book records buildings like the Casa Gorordo… it reminds us that we have these houses and we need to take care of them,” said Moreño.

Moreño said the public in general do not put premium on heritage houses and museums even when it takes more financial resources and physical and social effort to preserve them. 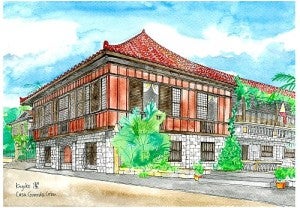 “It’s time that we change that mindset or else they will disappear,” he said.

Yamaguchi was born to a Catholic mother in Shiga, Japan in 1976. She studied architecture at the University of Californiaat Berkeley. She earned her Ph.D. in Southeast Asian Studies at Kyoto University.

She taught at the Chinese University of Hong Kong for seven years before she settled downin Kyoto as a watercolor artist in 2014.

During her stay in Cebu, she taught Southeast Asian Studies once a week at the University of San Carlos and worked closely with the Cebuano Studies Center which was then under Dr. Erlinda Alburo.

Yamaguchi said she decided to paint the houses instead of taking photographs of them so she can remember details and know them by the strokes of her brush.

including the descendants of couple Jose Velez and JuanitaVelhagen, the original owners of the house.

Yamaguchi talked about the Cebu towns like a native after spending countless hours walking around its streets and knocking on doors to ask questions about these houses. 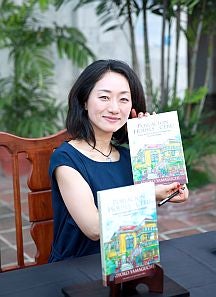 Architect Melva Java said Yamaguchi gave a human character to these old structures and presented Cebuanos with a different perspective of this rich part of their culture and heritage.

The book was published by the USC Press.

USC Press manager Dr. Jose Eleazar “Jobers” Bersales said the book is part of the Magellan Quincentennial Book Series, an initiative of the USC to prepare for the 500th anniversary of thearrival of Ferdinand Magellan and his Spanish crew on the shores of the port of Sugbo.

The book was printed by ClintKAMMS Corp and distributed by Phialo Trading Corp.

“I hope that through this book, the people of Cebu will have a shared memory of these beautiful homes,” said Yamaguchi.