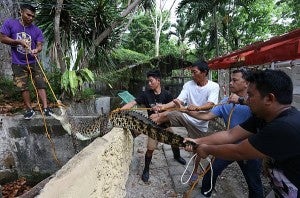 CLEARING CEBU CITY ZOO/MAY 5, 2017: Cebu City ZOO and Municipality of Amlan Negros Orriental personnel and DENR7 representative start to remove the crocodiles in the Zoo that will be brougth to Dreamland Nature and Adventure Park in the Municipality of Amlan.(CDN PHOTO/JUNJIE MENDOZA)

THEY’RE about ready to go to their new home, several miles away from the zoo in Cebu.

By the time they’re all brought out of their cages, the more than 70 animals of the Cebu City Zoo will be in the neighboring island of Negros Oriental, particularly in the town of Amlan. Personnel from the municipal government of Amlan, on Friday, started to put the zoo animals in boxes and crates in preparation for their long trip to Negros.

The animals were donated by the Cebu City government to Amlan’s Dreamland Nature and Adventure Park.

“We intended the travel time to be in the afternoon until evening so that that animals will not suffer from the heat during the day,” Utlang told Cebu Daily News.

It will take three to four hours for the cargo truck to get from Cebu City to the southernmost tip of Cebu in the town of Samboan.

From there, the truck will board a barge to Negros.

Earlier, the city government also donated some of its domestic and farm animals to farmers including chickens, rabbits, goats and sheep.

The closure of the Cebu City Zoo and the animal donation come in the heels of a land-swap agreement between the Cebu provincial government and city hall, which included the city land occupied by the zoo in Barangay Kalunasan.

Cebu City Mayor Tomas Osmeña decided to donate all the animals to Amlan which was interested in getting them for the town’s newly developed adventure park.