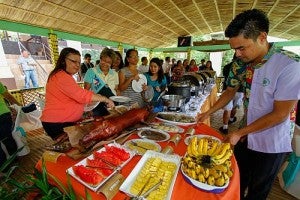 BOHOL LUBOC RIVER RELAUNCH/OCTOBER 24, 2013: Tourists are enjoying the buffet meal inside the Bohol floating resto and river cruise during its re-launching at the Loboc tourism complex in Loboc, Bohol.(CDN PHOTO/CHOY ROMANO)

Panglao Island, Bohol — While most feasts or fiestas are celebrated in honor of a particular patron saint, it is much more than that for those from Bohol.

For Boholanos living on the island or in other parts of the country or even abroad, the hometown “fiesta” is a celebration of life.

No matter where they are in the world and what they do, true-blooded Boholanos always make it a habit to return to their hometowns to take part in fiestas each year.

As the province of Bohol continues to be among the most visited tourist destinations in the Philippines due to its pristine white-sand beaches and exotic wildlife, the island is stepping up its game by offering travelers the cultural experience only fiestas can give.

“They say every day is a feast day in Bohol. We hope to eventually sell this to tourists since it is a cultural experience,” she told Cebu-based reporters during a tour on the eve of the Feast of St. Monica, Albuquerque’s patron saint, on May 3.

“Behold Bohol” was originally a campaign that entice tourists to visit the island when tourists dwindled following the devastating 7.2-magnitude earthquake that hit the province in 2013.

In this new package, tourists will get to find out what it is like to visit homes and feast on homemade food items and other delicacies prepared specifically by townsfolk during fiesta celebrations. 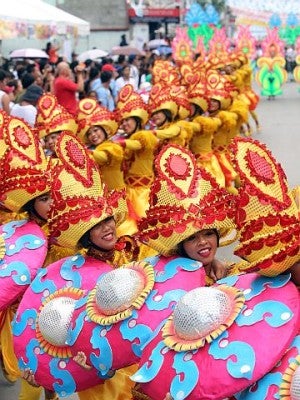 SANDUGO 2014: Bohol Institute of Technology-International College perform of the street during the Sandugo 2014 in Tagbilaran City.(CDN PHOTO/TONEE DESPOJO)

Bohol has 47 towns, with Tagbilaran City as its economic and government capital.

During the celebration of Sandugo, thousands of Boholanos from all over the world come home to “Tigum Bol-anon Tibuok Kalibutan.”

In Boholano culture, and in a number of other areas in the Visayas and Mindanao, residents open their houses even to strangers to partake in all the food they prepared during fiestas.

“Fiestas are celebrated all year in Bohol, but during May, it’s like it is celebrated every day,” said Noel.

Noel said they have tasked municipal tourism officers to identify which homes will accommodate visitors during fiestas.

She added that the package will target Europeans, since they place more premium on cultural experiences, although the fiesta is also still a novel idea to Americans and other tourist market segments.

The fiesta package has been piloted with bloggers last year and, just recently, with Cebu-based media who visited two houses in one night.

However, no date has been set for the formal launching yet.

Noel said they want to make sure that visitors will get to taste traditionally prepared food, not catered.

Food during Bohol fiestas are mostly pork-based, with selections that include lechon, humba, bola-bola, menudo and hamonada.

Judy Gabato, officer in charge of the Department of Tourism in Central Visayas (DOT-7), said her office fully supports the initiative of the Bohol provincial government.

“It reinforces faith-based tourism, which is a program of (Tourism) Secretary Wanda Teo,” she said.

Despite the recent clashes involving government troops and members of the notorious kidnap-for-ransom Abu Sayyaf Group (ASG) in the towns of Inabanga and Clarin, as well as the travel advisories by a number of foreign governments enjoining their residents to avoid visiting Bohol, many foreign tourists still choose to travel to and from the province.

Among the well-loved tour sites in Bohol are the Chocolate Hills in Carmen, Loboc River and the manmade forest in Bilar, the historic Baclayon Church, and the beaches on Panglao Island.