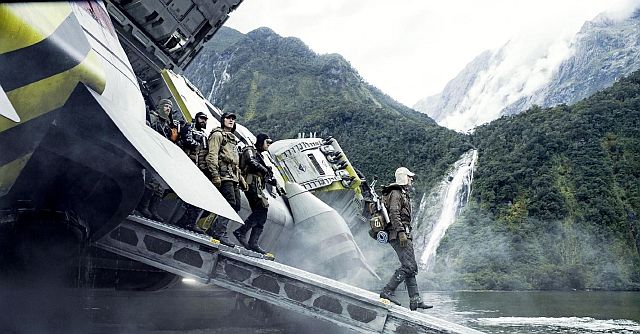 Run as fast as you can.

Run until you no longer have breath in your lungs and your chest feels as if an elephant has stomped all over it.

Then run faster — as if your very life depended on it.

And it does for the woeful pilgrims in “Alien: Covenant,” the second of Sir Ridley Scott’s three (or more) planned prequels to the 1979 classic “Alien,” which tells the tale of the deadly xenomorph and the eventual destruction of the cargo vessel, Nostromo.

To appreciate “Alien: Covenant,” you must go back and watch (or read herein) the disastrous tale of the scientific space vessel Prometheus, and film of the same title in 2012, which landed on a planet far far away, seeking the secrets of eternal life. Only two from the ill-fated Prometheus expedition survived their journey; lead scientist Dr. Elizabeth Shaw, (Noomi Rapace)  and the quasi-villainous android known only as “David” (Michael Fassbender). These two flew away from LV-223 in a colossal alien spaceship, seeking a mysterious paradisiacal home world of the supposed creators of mankind so many eons ago — seven-foot tall, bald-headed humanlike entities known only as the Engineers.

Director Ridley Scott (“Blade Runner”), working from a script written by Oscar-nominated screenwriter John Logan (“Gladiator”) then moves the story 10 years forward from the Prometheus disaster and introduces the Covenant, a massive space vessel filled with 2,000 colonists (husband and wife duos) departing the Earth, seeking their own paradise-like world at the farthest reaches of outer space on which to multiply humanity. 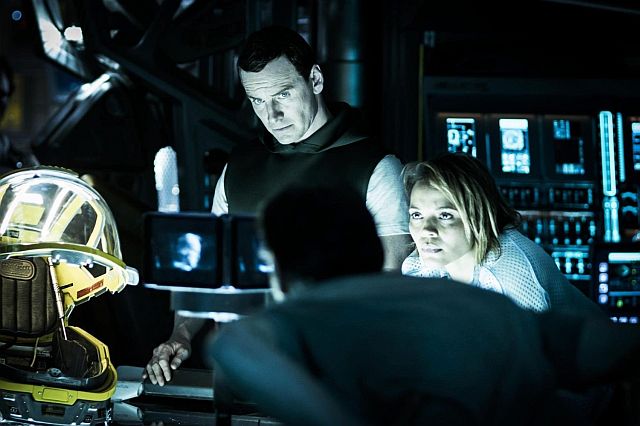 The crew has great camaraderie as they share a final meal and a toast to those many hundreds who have already settled down for a very long hyper sleep.

Traveling at near light-speed, the crew of the Covenant that remains awake (along with the life pods of the sleeping colonists) come across a “distress” signal from a nearby Earth-like planet they think could be the perfect paradise world in which to repopulate the human species. Being the do-gooders that they are, the Covenant crew decide to investigate this beautiful, mountainous world with gorgeous lakes and streams, sending down a “drop ship” of several workers, marines and their own android, “Walter” (played in a dual role by Fassbender) who is a splitting likeness of the less advanced “David” model.

Landing their small vessel onto this magnificent wooded landscape — filmed at the lush Milford Sound in Fiordland National Park, New Zealand —everything, at first glance, looks serene and calm.

While stopping to take a break and their investigation of their new world to light up a cigarette (they will be the death of you!) one of the explorers inadvertently steps on what he thinks is just a piece of dead wood, which instead releases a floating microbe that enters his body, via his right inner ear. 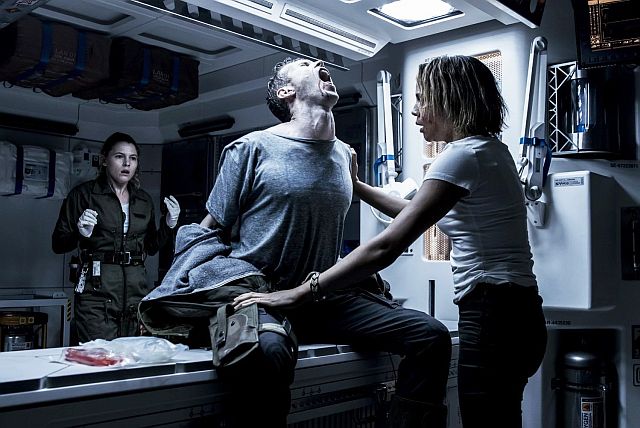 More on that in a moment.

This is when things start to get really creepy.
As the colonists are walking around, they immediately notice how eerily quiet it is.

Like a tomb. No insects. No birds. No animals. Nothing.

Eventually, the Covenant explorers come across the wreckage of the massive U-shaped spaceship that was previously piloted by Dr. Shaw and David.

Taking a step backward for a moment, we learn that during the long space voyage to this planet, Dr. Shaw had repaired the head/body of the android which had been ripped apart by one of the Engineers (at the end of “Prometheus”), herself sleeping away in a pod nearby.

Apparently with far too much time on his hands during this space voyage to “paradise,” David experimented with DNA-altering “black goo” that the Engineers had stockpiled on board this alien ship found by “himself” and Dr. Shaw during the Prometheus expedition. It is this substance that David unleashes at the beginning of Alien: Covenant, dropping thousands of liquid-filled canisters onto the unsuspecting Engineers who have gathered in a Roman-like stadium, curious at the arrival of this gigantic spaceship. 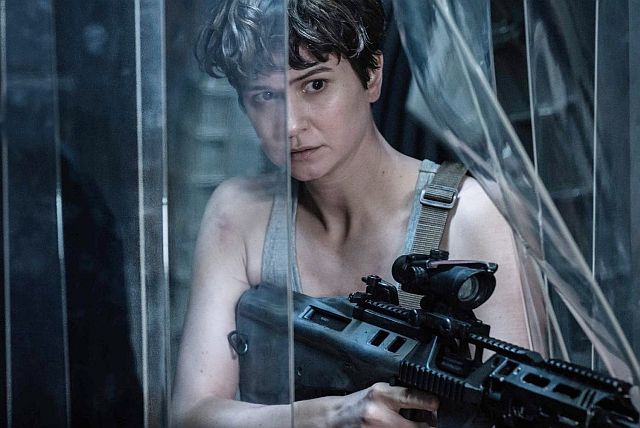 They run in terror as the canister liquid is unleashed, creating monstrous transformations as a titanic struggle begins.

Then, during the subsequent decade on this planet until the arrival of the Covenant, our “friendly” android studied everything about this Engineer race and the substance that transforms humans into hideous xenomorphs. Their remains and that of their technologically advanced civilization is eventually found by Daniels and the Covenant explorers.

Fearing the worse, Daniels and her crewmates rush back to the drop ship with another infected crew member, just in time to see it explode and the screaming to begin.

Remember the intrepid colonist who had a floating airborne “bug” land onto his inner ear? The “spore” infected him with a parasite that grew into a worm, wrapped itself onto his spine — and instead of bursting out of his belly — instead pops out of his back! This baby neomorph kills a crew member, breaks out of the medical bay and skidders around the drop ship before one of the colonists takes aim with a shotgun, misses and blows up the ship, killing herself and the remaining colonists’ only means of escape.

These never before seen, back-bursting neomorphs are incredibly lethal, stands/run on all fours like a dog, are white in complexion and oh so fearsome with fangs for teeth and a whiplike tail.

As Daniels is helping drag the second infected crew member, another baby neomorph appears, clawing its way out of his mouth!

Now you have two extremely lethal creatures on the loose and the remaining explorers have no idea what’s coming for them. 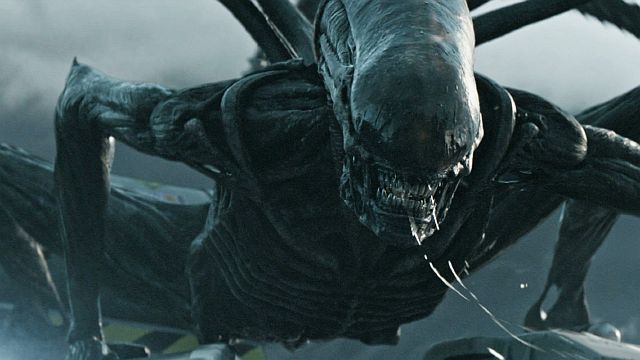 “Alien: Covenant” is a worthy carry on from the extremely perplexing Prometheus, and all sci-fi aficionados will love watching their fellow humans being turned into meat sacks for those cute little baby face-huggers.

This is NOT a movie for the faint of heart.

It is gory to the uber extreme the gallons of blood everywhere when the Covenant crew starts being carved up like a hot turkey dinner.

Sir Ridley Scott pledged that after the lackluster presentation of his first Alien prequel — “Prometheus” — he would turn up the body count in “Alien:Covenant” and he certainly does, significantly moving forward the Alien mythos to connect first “Prometheus” and now “Covenant” to his original 1979 classic “Alien” film.

Of course, it “helps” when humans do really stupid things.

Let’s take a moment to review.

The Covenant crew, who have traveled from Earth to the farthest reaches of our known galaxy and discover this “paradise” — are presumed to not to be in a hurry. So they land an exploratory vessel onto an unknown and uncharted planet after they receive a mysterious emergency beacon/transmission and DON’T send out just the android (who is nearly invulnerable) for a few days or even a week of 24/7 walkabout reconnaissance?

Better yet, why not drop down a few helicopter droids (or satellites) to properly survey the planet which of course would have discovered the Engineer city and their horrific remains.

Oh … and the Covenant crew walks around this hereto unknown world — which by happenstance has a perfect oxygen-nitrogen atmosphere —without a proper space suit and helmet?

Once you can get past of the numerous plot holes, “Alien: Covenant” is a terrifying thriller, clearly a worthy successor to the dull and boring “Prometheus.”

Surviving “Alien: Covenant” depends on just one thing — how fast can you run?