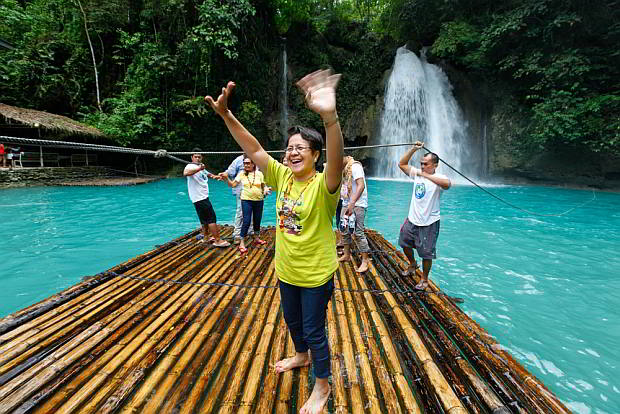 A guest gets ready for a raft ride with Vice Gov. Agnes Magpale (behind in yellow T-shirt) in Kawasan Falls in Badian town in this file photo.

Despite of the travel advisory issued by British Embassy to avoid travelling to the town, Badian police assures the public and the tourists of their safety when visiting their town.

Badian Police chief Senior Insp. Bonifacio Pareja issued a Public Advisory on Sunday, May 14, after the British Embassy in Manila issued an updated travel advisory on May 11.

The British Embassy, in its advisory, urged its nationals to avoid traveling to southern Cebu, particularly the towns of Badian and Dalaguete, due to alleged threats of terrorism.

Pareja however assured the public that their town remains safe for tourists.

He said they have put in place various security measures to secure tourists especially foreign nationals visiting their tourist spots like the Kawasan Falls as well as the beaches.

Pareja enjoins also the public to be vigilant and alert the police and the local government officials of any suspicious individuals and activities./CNU Comm Intern Geralyn Alba