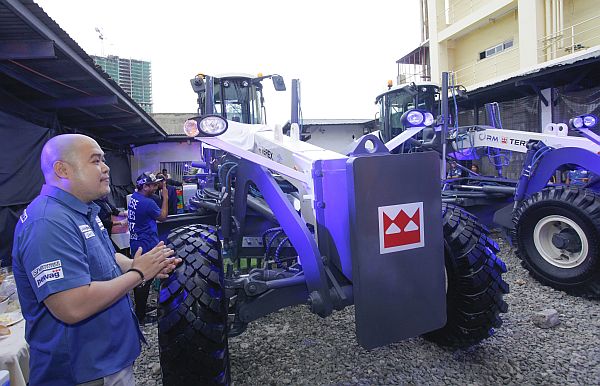 Conequip Chairman and Chief Executive Officer Seth Oliver Tio at the unveiling of the two newest brands the company will carry.
CONTRIBUTED PHOTO

A player in the construction industry sees high demand for construction equipment amid the government’s thrust to ramp up infrastructure spending in the next six years.

Seth Oliver Tio, chief executive officer and chairman of Cebu-based company Conequip, said he foresees the construction industry in Cebu and the rest of the country to grow further in five to 10 years.

“There’s still a lot of potential for the infrastructure business to grow in the next few years, not only in Cebu but in other parts of the country,” he said during the unveiling of two new brands under their lineup at the company’s showroom along Juan Luna Avenue in Cebu City on Monday.

Conequip launched RM Terex — a joint venture between Russian Machines, a leader in the industrial and engineering industry in Russia; and Terex Corporation, a global manufacturer of various equipment used in several industries, including construction, infrastructure and transportation.

The company also introduced Ural, a purely Russian company that is also a leading manufacturer of welding equipment and automotive vehicles, among others.

Edgardo Antonio, director and consultant of homegrown brand Conequip, said there are many incoming government projects that have already been funded or bid out this early.

“There will be a great demand for heavy equipment here, especially in the Visayas and even in Mindanao,” he said.

Antonio pointed out that under the Duterte administration, there are already many big-ticket infrastructure projects in the pipeline, which are all seen to fuel the local construction industry.

Government officials earlier said that a total of P8.4 trillion would be spent for infrastructure during the six-year administration of President Rodrigo Duterte so that the share of infrastructure spending in the gross domestic product would rise from 5.4 percent this year to 7.4 percent by 2022.

The partnership also came at a time when the Philippines has started to warm up to Russia in a bid to explore markets other than the United States.

“Maybe it’s about time that we discover that the world is really much bigger than what we used to know. There are other trade and business opportunities that we have yet to explore, and I think Russia is one of them,” said Antonio.

Tio, meanwhile, said Conequip began negotiating for the partnership with the two Russian companies last year with the main objective being the creation of a market for Russian products in the Philippines as well as to cater to after-sales services.

Over the years, Tio said the company has been growing due to the synergy of its brands as well as its wide selection of products.

At present, Conequip carries six brands with Ural and RM-Terex being the last in the lineup for the next five years.

The homegrown company’s client base is spread across the whole country, but 60 percent of their market is government while the rest is private.

Ilynikh Eugenia, Ural sales manager, said they saw the Philippines as a very interesting market because of its demand for commercial transport.

Ural, which is part of the Russian automotive conglomerate GAZ Group, sells its products in 60 countries across Africa, Asia, Latin America, Europe and the Middle East.

“I think (entering the Philippines) is a new experience for us. I hope there will be mutually profitable cooperation,” he said.

As they try to reach out to more friends in business, Eugeni said it also helps that the presidents of both Russia and the Philippines are also starting to foster stronger relationships.

Read Next
Students urged to aim for careers in IT, BPO, blue-collar jobs