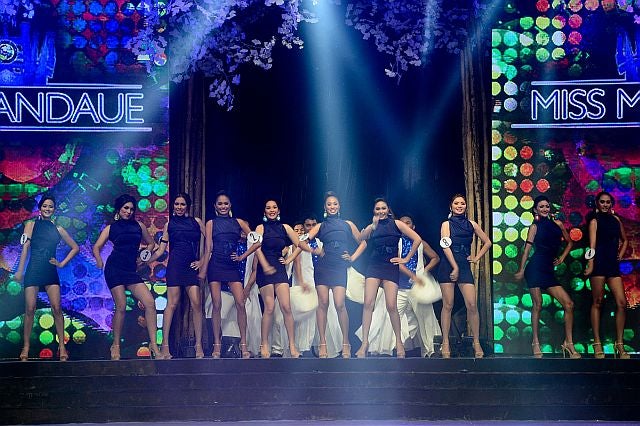 UNIFORM BEAUTY.
Jul Oliva sent out the 12 candidates
in a midnight blue
baby doll dress
before revealing her summer collection.

THE BACKSTAGE did not look like the backstage I used to intrude when I was 17. You know it very well, too: crew members hollering, rushing through the doors to the makeup department for time check while hamburger wrappers scattered on the stairwell. It was rather a breathable space
for anyone who should be rightly insane of the hectic schedule. As in the case of Jul Oliva—the fashion designer who wasexpecting the 12 ladies to burst through the dressing room at least 40 minutes before the show begins.

“I was asked to do another magic this year,” she told me.

By that, she meant the same treatment she created for Miss Mandaue 2015 Ena Louis Velasco who had an onstage wardrobe transformation when she opened the annual pageant in 2016 with a dance performance.

It’s an open secret in the creative community, but Jul has found another “fabric mechanism,” which could achieve the original idea.

“Now, I have to do 12 more of it,” she continued. For the opening number, the 12 candidates of Miss Mandaue 2017 wore Jul’s summer collection last May 6 at the Mandaue Sports Complex straight from the pre-pageant events.

Understandably, they had a tighter time to slip into the dresses.

“Are you stressed?” Jul asked me, laughing at how worried I looked. You could trust that she is a master of her craft—like second skin, perhaps—for being so calm, given a limited number of assistants versus the amount of labor. She usually prefers to be behind the limelight, but for this function, it was very easy to spot her in the crowd. She was in a knee-length draped tunic over a pair of distressed jeans, open-toe flats… and well, her bob hair, slowly becoming a personal signature among close friends.

Not that the anxiety was palpable—if indeed she was oh-so-worried—she did a good job managing the quivers. But a better job at the collection: She sent out the ladies in identical midnight blue jersey doll dresses. In the middle of the number, integrated in the choreography (to the tune of Chris Brown and Deorro’s “Five More Hours”), each of the girls unraveled the resort pieces hidden underneath. Based on the thundering applause, the mood was already set.

Since the birth of her summer collection, Jul took cues from how wide the arena was. How did she cure it without the cliché frills of a fiesta show? Colors. She was so sure of the tones she sought. They appeared to be jewels from the box—and certainly not a packet of marshmallows—beset just right in the middle of light and warm hues.

It was a risqué, after all. She opted for the mullet silhouette to endow the design with natural fluidity, something that she minimally does at her atelier in Paradise Village in Banilad. She is a disciple of texture and architectural forms (perhaps, because she is one of Kenneth Cobonpue’s industrial
designers, too). Even without extra manipulation, fluidity was the central subject of the concept.

But still, she incorporated a little draping where the necklines ended to enliven the fabric flow.

When a new song was played —“Give What You Give,” a Felix Cartel mix—the audience anticipated a surprise. The 12 candidates descended to the stage wearing the summer collection of Arcy Gayatin, who was also seated in the jury panel (wearing a red rose printed tunic with mesh neckline and sleeves). She constructed a garden of flowers on crisp white neoprene numbers. As Cebu’s queen of draping, she showcased another of her design prowess— embroidering patches of floral patterns. Apart from it, Arcy thrilled the crowed with wide yet cohesive silhouettes. Say, she made a
column dress with twin billowy ruffles on the neckline and on the knee circumference. The same was also seen on this year’s crowned Miss Mandaue Ralphiela Lewis, except for the keyhole on the bust.

Arcy’s version of the mullet was well defined in proportion: clubbing in front, cocktail at the back. It was a reinterpretation of a floor-sweeping A-line gown with a wider opening in front that revealed a skimpy pair of shorts. But best of all was a fresh wide-leg pantsuit with soft, bell sleeves that could lend any woman the designer’s aura of unspoken elegance: a kind of soaring spirit she has hoisted for more than 25 years in business.

No wonder why the backstage became a controlled environment for all of us present—because the masters were in the house. And they know how to put up a real show.