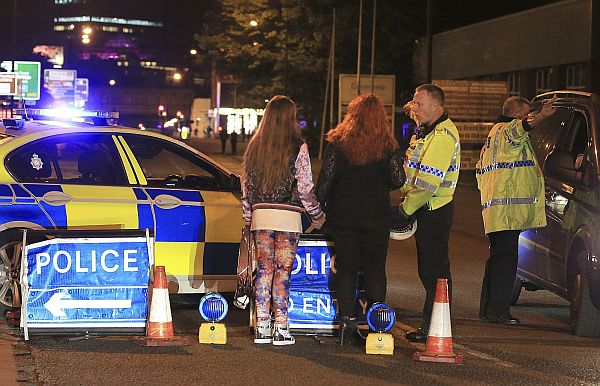 Police work at Manchester Arena after reports of an explosion at the venue during an Ariana Grande gig in Manchester, England.
AP

Manchester, United Kingdom — Twenty-two people, including children, were killed and dozens injured when a man detonated a bomb at a pop concert by US star Ariana Grande, in Britain’s deadliest terror attack in 12 years.

Screaming fans, many of them teens, fled the venue in panic after the bomb blast at the end of the concert in the northern English city of Manchester on Monday evening.

“There was heat on my neck and when I looked up there were bodies everywhere”, Elena Semino, who was waiting for her 17-year-old daughter, told the Guardian newspaper.

Semino, who was herself injured, said she had been standing by the ticket office of the 21,000-capacity indoor Manchester Arena when the explosion went off.

“A huge bomb-like bang went off that hugely panicked everyone and we were all trying to flee the arena,” said Majid Khan, 22, who was at the show with his sister.

Ambulances and bomb disposal teams rushed to the venue, as family members frantically searched for their loved ones, and residents opened their doors to stranded concertgoers after trains were cancelled.

There were children among the 22 killed in the attack, while 59 people were injured, Greater Manchester Police chief Ian Hopkins said early Tuesday.

British Prime Minister Theresa May condemned the “appalling terrorist attack” and suspended her campaign ahead of a general election on June 8 along with chief opposition leader Jeremy Corbyn.

“All our thoughts are with the victims and the families of those who have been affected,” said May, who was due to chair an emergency ministerial meeting on Tuesday.

Grande, who was due to give a concert in London later on Tuesday, said she was “broken” in a tweet.

“Broken. From the bottom of my heart, I am so, so sorry. I don’t have words,” wrote the 23-year-old, who is popular with teens and pre-teens. /afp