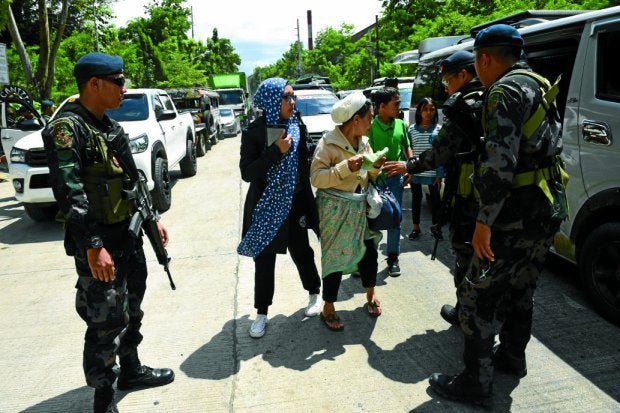 Policemen check evacuees from Marawi at a checkpoint in Iligan City, Mindanao following Tuesday’s siege by members of the militant Maute group. President Rodrigo Duterte has declared martial law on Mindanao and raised the possibility of putting the entire country under military rule to combat Islamist militants.
AFP PHOTO

President Rodrigo Duterte raised the possibility of expanding the coverage of martial law to the Visayas and even Luzon, putting the entire country under military rule, to protect Filipinos from the Islamic State of Iraq and Syria (ISIS) web of terror.

“I may decide to expand the area to include the Visayas because it is just a walking distance actually and because of the many islands, they (Maute group) can always escape there and begin another terroristic activity,” the President said in a speech upon his arrival at the Ninoy Aquino International Airport (NAIA) following a hurried flight back from Moscow.

Mr. Duterte said he has ordered the military, particularly the Navy, to cordon off the body of water that separates Mindanao and the Visayas.

“I might also decide to suspend the writ of habeas corpus in the Visayas,” he added, saying that it would depend on the outcome of a meeting with his cabinet.

President Duterte said he may also impose martial law and the suspension of the writ of habeas corpus in Luzon to protect all Filipinos from terrorists.

“This is not intended for law-abiding citizens. This is the least of your worries. But to anyone holding a gun with violence, my order is to shoot and kill.

I will not hesitate to do it. Let us resolve the problem in Mindanao once and for all. I won’t allow the country to go to the dogs,” he said.

His declaration of martial law and the suspension of the privilege of the writ of habeas corpus in Mindanao were prompted by Tuesday night’s siege of Marawi City.

At least two soldiers and a policeman were so far killed in clashes with members of the Maute terror group in Marawi City, Lanao del Sur.

In a televised press briefing from Russia on Tuesday, Defense Secretary Delfin Lorenzana said the soldiers raided the hideout of terrorist suspect Isnilon Hapilon in Marawi City, sparking a gun-battle that prompted the militants to call for reinforcements.

Hapilon is a leader of the Abu Sayyaf Group, which like the Maute terror group, is affiliated with ISIS.

The terrorists, he said, also occupied some establishments in Marawi City, including the government-run Amai Pakpak Hospital, city hall, city jail and parts of the Mindanao State University compound.

No need for martial law

A retired judge who was imprisoned when dictator Ferdinand Marcos put the country under the martial law in 1971 found no reason for President Duterte to put the Visayas and Luzon under the martial rule because of the Maute crisis in Marawi.

“There is no state of rebellion or invasion in the Visayas and Luzon regions. Also, public safety does not require it (martial law). Maybe, it can be imposed in Mindanao, particularly in Marawi, but not in Visayas and Luzon,” said retired Judge Meinrado Paredes.

Speaking to reporters at the NAIA, Mr. Duterte admitted that the sight of an ISIS flag hoisted over the war-ravaged city in Lanao del Sur province firmed up his decision to actually declare martial rule.

He pointed out that the act of flying the ISIS flag removed the allegiance to the Philippine government of that portion of Mindanao and “deprived the Chief Executive of his powers and prerogatives to enforce the laws of the land and to maintain public order and safety in Mindanao, thereby constituting the crime of rebellion.”

“I am appealing to the humanity of everybody especially those who sow terror, do not allow ISIS to come in. I warn you again, do not do it because as I have said, my response would be harsh. I will not hesitate to do anything and everything to protect and preserve the Filipino nation,” he said.

At some point Mr. Duterte joked that he had left the actual declaration he signed in his hotel room in Moscow, only to whip it out and point out the irony of declaring martial rule in the Russian Federation.

He stressed that martial law will only be lifted “if the police and the military tell me everything is stabilized.”

Mr. Duterte nevertheless assured: “In all decisions and actions, let me assure you that primordial concern is the safety and welfare of our people. It is our constitutional mandate to enforce the law and provide security. It is our constitutional duty to ensure that every family, every community, all Filipinos are assured to live in peace and harmony. We will stay true to our mandate and duty, this I can assure everyone.”
According to the President, martial law is particularly directed on those who confront the government with violence.

“I will assure you, I am not willing to allow abuses (under martial law). The government is running. Congress is functioning. The courts are open for citizens to seek (redress of) their grievance. But in keeping with the law and order, it behooves now on the military to do what is expected of them, restore order,” Duterte said.

President Duterte vowed to do his best to stop terrorism in the country; otherwise, he might as well step down.

“As President, if I cannot confront them, I will resign. If I am incompetent in keeping order in this country, let me step down and give the job to somebody else. But I will deal with this problem as it is. Do not force my hand into it. I will be harsh in enforcing the law,” he said.

“If the tests proved to be reliable, he will find a pretext to place the entire country under martial law. The tension is confined in Marawi. There was no need for him to place all of Mindanao under martial law,” he added.

Barcenas said the declaration of martial law is a gradual transition to authoritarian rule.

“This is a dangerous track we are treading. I hope people will try to analyze the situation. It’s as if the government is playing with fire here. President Duterte is following the footsteps of his favorite dictator (the late President Ferdinand Marcos) whom he allowed to be buried at the Libingan ng mga Bayani,” he said.

Failure to curb lawlessness, Barcenas said, is not an excuse to declare martial law.

“In reality, he (President Duterte) cannot solve all the problems like poverty, rebellion, and lawlessness. What is happening now is a prelude to declaring martial law in the entire country which is very dangerous,” he said. /with reports from April Alexis Agustin, Xavier University Intern

Read Next
Experts share strategies to level up one’s brand