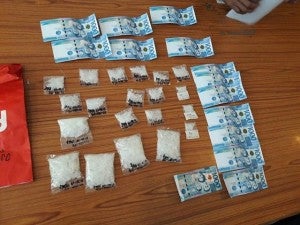 300 grams of illegal drugs with estimated market value of P840,000 were seized by PDEA 7 agents during a buy-bust in Barangay Mambaling on Friday morning. (CONTRIBUTED PHOTO)

Agents from the Philippine Drug Enforcement Agency in Central Visayas (PDEA 7) successfully transacted five grams of white crystalline substance believed to be shabu from Jose Abayan, 31, who was the subject of the arrest.

Seized from the suspects were more or less 300 grams of illegal drugs with estimated market value of P840,000.