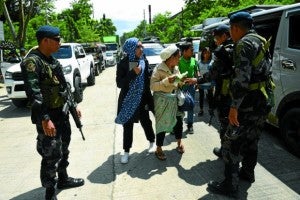 Policemen check evacuees from Marawi at a checkpoint in Iligan City, Mindanao following Tuesday’s siege by members of the militant Maute group. President Rodrigo Duterte has declared martial law on Mindanao and raised the possibility of putting the entire country under military rule to combat Islamist militants.
AFP PHOTO

Osmeña favors Duterte’s plan to arm civilians in fight vs terrorists, but CHR warns this could create  a ‘very dangerous situation’

Let civilians bring their own firearms to help fight terrorists and criminals.

Although the plan of President Rodrigo Duterte is primarily intended for Mindanao, Cebu City Mayor Tomas Osmeña has expressed his desire to also arm civilians in the Queen City of the South.

“I am very much in favor of this, even for Cebu. The police is a force of thousands trying to protect a population of millions. They cannot be everywhere all the time,” he said in his Facebook post on Friday.

But the Commission on Human Rights (CHR) is not about to give its blessing on the plan of arming civilians.

In a speech upon his arrival in Manila from Russia on Tuesday, President Duterte said he would allow civilians to carry arms if things went out of hand and there was “severe fighting” in Mindanao.

“I will allow the Mindanaoans, Moros and Christians alike, if you are in a possession of a gun licensed by government and in order to give you security and protect your family, you can bring it out,” he said.

But President Duterte explained that only civilians with firearms licensed under their names would be allowed.

Mr. Duterte has put Mindanao under martial law for 60 days as the clash between government troops and the Maute terror group in Marawi City, Lanao del Sur, continues.

The Islamic State–inspired Maute militants that has pledged allegiance to the Islamic State in Iraq and Syria (ISIS) took over parts of the city, burned some infrastructures and took as hostage a Catholic priest and 13 others.

The siege dragged on and triggered mass evacuation and destruction of a number of establishments.

At least 31 Maute terrorists of different nationalities, 11 soldiers and 2 police officers were killed.

President Duterte said he may extend the martial law in the Visayas and Luzon regions to stop terrorists from sowing violence in other parts of the country.

Although the plan would be limited to Mindanao, the Cebu City mayor, who is a known gun enthusiast, wants it implemented also in his city.

A responsible armed population, Osmeña said, hinders terror attacks and other lawless violence. “Terrorist (sic) are much less likely to try to shoot a place when they know the people there can shoot back. Licensed gun owners are screened just as heavily as police, if not more so. Furthermore, many private owners work towards firearm proficiency not because they have to, but because they want to,” Osmeña said in his Facebook page.

“In a time of uncertainty, they are personally motivated to protect their families. I see no better reason to allow them the means to protect themselves, and I fully support the President in his decision,” he added.

In another FB post, Osmeña said he even wants the City Council to pass an ordinance to allow policemen to carry their firearms inside malls and other publicly accessible places.

“The policy of most malls to not allow armed policemen inside is ridiculous. Who’s supposed to stop an attack if it happens inside the mall? Will a terrorist check in his firearm,” he said.

“No law is going to stop a criminal or terrorist from being armed anyway. Criminals are by definition people who break the law.”

But Odron said the suggestion would create a “very dangerous situation.”

“I have not heard that pronouncement yet. I presumed it could either be arming the civilians for their personal security or to help the government in policing, that is, enforcing the laws to keep or maintain the peace and order in the locality,” he said in a text message to Cebu Daily News on Friday.

“In either way, both will create a very dangerous situation to the extent of equipping the civilians with firearms. With all the resources available to the government, I don’t think it is appropriate to resort to that idea or plan. Law enforcement entails rigid training and intense selection process to better equip them and to prepare them from any untoward (incident),” he added.

Odron said allowing civilians to carry firearms might only worsen the situation.

“The difference is our law enforcement sector have been specifically hired, paid, and trained by the government in enforcing the laws with the use of firearms mindful and with due regard to the human rights norms and standards, which is absent in civilians,” he said.