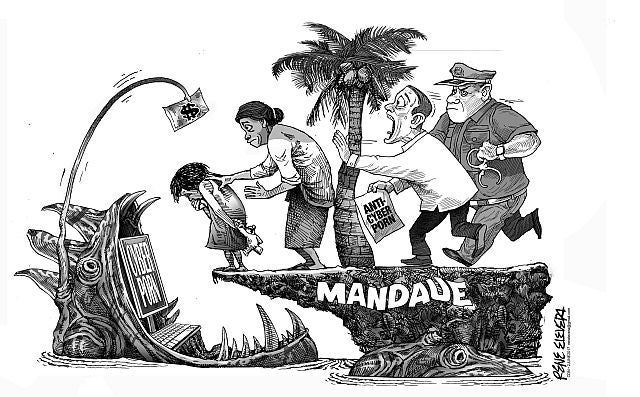 The arrest of a mother who wasn’t able to pay her power bills for her shanty yet managed to operate a sari-sari store that served as the venue for her cyberporn trafficking was all the more alarming since it occurred in Mandaue City.

Not in Cordova town which earned a reputation as the hotbed for cyberpornography nor even in Lapu-Lapu City where trafficking occurs both at home and in internet cafes, but in Mandaue City where the crime rate isn’t as pronounced as Cebu City.

In the case of Cebu City, however, trafficking suspects have been speedily arrested thanks to the cooperation of international agencies and the International Justice Mission (IJM) which had become a staple of sorts as they are proactive in raids on suspected trafficking sites.

The neighbors could have reported the woman earlier, seeing that it is suspicious why she and her family only wanted to keep the lights on in their store and not in their home where they can rest for the night.

It turned out that the store had lots of gadgets with WiFi connections that allowed the mother and her partner to stream simulated sexual acts of her children to aging predators online.

If the fact that they were able to pay for their WiFi connection while supporting their store indicated that they are managing quite nicely, it was that the neighbors didn’t report her to the police immediately, allowing her to exploit her children for five to six years.

One of her daughters, in fact, was the girlfriend of a convicted Australian who got jailed after police managed to catch him with downloaded sexual images. These were taken by the mother with one of her daughters as the victim.

Aside from poverty, one of the reasons why indigent parents are willing to engage in cyberpornography and trafficking is that it is, based on their reasoning at least, a “victimless” crime.

It won’t be the last cyberpornography case to be uncovered in Mandaue City by a long shot, so we wonder how many more are occurring behind the privacy of the homes. And those within earshot are unaware or simply not bothering to report these to the authorities.

Barangay officials should address and raise awareness of cyberpornography at the grassroots level to better involve and stoke public vigilance against this menace in cooperation with law enforcement agencies, which have managed to link up with foreign institutions to better eradicate this scourge that remains hidden in our midst.