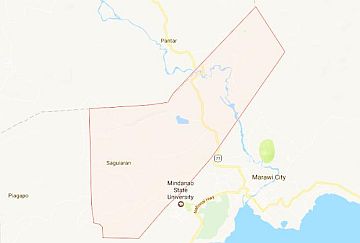 Saguiran is a fourth class municipality about 10 km from Marawi. (Image from Google Maps)

SAGUIARAN, Lanao del Sur – This sleepy fourth class town of 24,619 people scattered in 30 barangays, suddenly came to life as hundreds of people from Marawi City – some 10 kilometers away – started arriving on May 23 as they fled the fighting between government troops and extremists. But along with the influx of evacuees, local businessmen find their income doubling, if not tripling.

Kaina Malik Nasser, a resident of Barangay Mapantao here, said she was now selling smoked fish faster than before.

Her sales were brisk even if there were dozens of other smoked fish vendors lining the one kilometer stretch of road fronting the town hall – which serves as the town’s public market.

Nasser said she could not have sold the same volume before the fighting in Marawi started.

But she said vendors like her did not take advantage of the situation as far as pricing was concerned.

“Our price really depends on the price we pay from our sources,” she said. “But so far, a bakas is still being sold at P380 a piece,” she said.

“Bakas” is the local term for smoked juvenile tuna, which weighs around at least 2 kilograms each.

“We’re happy to make double than what we did before. No need to raise the price,” she said.

Omayra Rosbel, also a local fruit vendor, said that, while they were sad that Marawi was being destroyed, the influx of people from the city really helped them.

“We never managed to sell as much before,” she said. “We just make a few peso before the evacuees came in.”

Rosbel said she now made a minimum of P300 per day in profit from selling all sorts of fruits.

“Many people also found selling fruits profitable so they started their own,” she said. “Now there are many of us fruit vendors and we cater to the same customers, locals and evacuees.”

Rosbel and Nasser said foodstuff had been selling fast lately.

“The evacuees still have money to spend, and many of them want to eat food other than those being distributed by relief groups,” Nasser said.

Among those who would rather eat fresh food than canned goods and noodles was Haini Sarip and her family – including her siblings and parents.

Pooling the little money she had and that of her siblings, Sarip started a fish and poultry meat business, just stone’s throw away from the evacuation center in front of the town hall here.

“We sell chicken at P150 per kilo, almost the same price you pay when you buy elsewhere,” she said, stressing that she and her siblings did not take advantage of the situation of the evacuees.

Sarip said she and her siblings decided to venture into the business three days after they arrived here and sought refuge in their relatives’ homes.

“It’s difficult to rely on relief assistance,” she said. “The line gets longer by the day. It’s better we earn money so we could buy fresh food for the family.”

She said they would earn about P1,500 per day in profit, which she and her siblings would divide equally so they would end up with about P500 each.

Sarip admitted that the situation had forced her to think outside the box.

“It’s my first time to become businesswoman,” she said with a grin.

Mayor Macmud Muti said the town had allowed evacuees, who wanted to make some money from selling food, to set up shop temporarily.

Like local vendors, they had to pay “arkabala” too.

Nasser said that, while she was happy that business was booming here, she would rather that the situation in Marawi City normalized.

“The people are really suffering,” she said. “It should stop. They should stop fighting.”

“It’s a difficult life if you’re living in this situation,” she said.