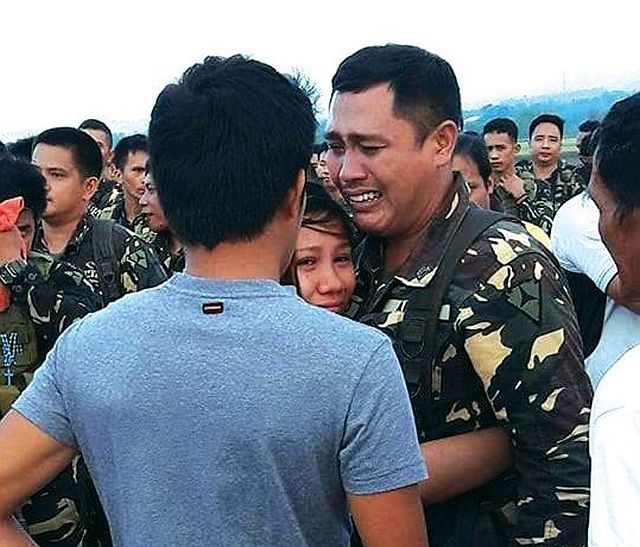 CRYING SOLDIER. An army personnel tearfully embraces his wife, who is also in tears, as troops of the Philippine Army’s 82nd Infantry Battalion bid their loved ones goodbye at the Iloilo International Airport before they are flown to the Laguindingan Airport in Misamis Oriental en route to Marawi City on Saturday, June 17, 2017. ( Photos courtesy of Aksyon Radyo Iloilo)

They are battle-experienced soldiers, but they unabashedly shed tears and hugged their wives, children and other loved ones as they left Iloilo on Saturday to beef up government troops fighting the Islamic State-inspired Maute terror group in Marawi City.

Barely 24 hours before the celebration of Father’s Day, the first batch of 428 soldiers under the army’s 82nd Infantry Battalion (82IB) — most of them fathers leaving behind wives and kids — took off from the Iloilo International Airport in Cabatuan town at around 9 a.m. on board a C-130 military transport plane that came from the Benito Ebuen Air Base on Mactan Island and brought them to the Laguindingan Airport in Misamis Oriental, located in between Cagayan de Oro City and Iligan City with the latter adjoining Marawi.

The tearful goodbyes between the soldiers and their loved ones, and even among soldiers leaving for Mindanao, came just hours before a more subdued President Rodrigo Duterte, speaking before soldiers based in Butuan City, conveyed his overflowing love for the soldiers fighting the war on terror, especially in Marawi City.

“I love you all,” President Duterte told soldiers of the 4th Infantry Division command post in Barangay Bangkasi here on Saturday, five days after his last public appearance.

“I am filled with nice feeling, I love you all. Mahal ko kayong lahat. Nasasaktan ako pag may nadigrasya,” the President said near the end of his speech that was free of any cuss word.

The President made his visit in Butuan City as fighting between government troops and Islamic State–inspired militants entered its 24th day.
Col. Medel Aguilar, the assistant head of the unified staff of the Civil Military Operations of the Armed Forces of the Philippines Central Command (Centcom), told reporters in Cebu that the troops from Panay sent to Mindanao will be placed under the AFP Western Mindanao Command, which will direct their areas of deployment.

Aguilar yesterday enjoined the public to keep the soldiers in their prayers.

“Let us pray for their good health and safety,” Aguilar said. 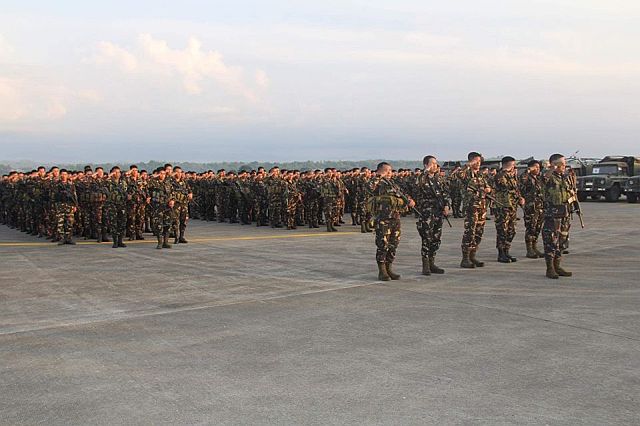 Aguilar also urged the soldiers to keep in hand the prayer for guidance written by Cebu Archbishop Jose Palma that read, “This could be the proudest moment of every soldier. The task may be difficult, and at times risky, but with heads held up high as we face uncertainties in front of us, we need not have to look back because the Filipino people, hopefully, regardless of social, religious and political affiliation, are all behind us in the fight for peace and justice.”

In Iloilo, the last and fifth batch of Mindanao-bound soldiers was expected to leave around 8 p.m. on Saturday. Those deployed included 409 enlisted personnel and 19 officers.

Their loved ones accompanied them at the airport in an emotional send-off for their new assignment after being deployed for more than seven years on Panay Island, fighting against New People’s Army (NPA) rebels.

The soldiers were seen hugging, kissing and crying along with their families.

“We are ready, and our troops are capable. There is apprehension and a feeling of uncertainty because many of them have not been to Mindanao. They have also seen the news reports about the fighting and casualties in Marawi City. That is normal (for them to feel that way),” Lt. Col. Vener Morga, 82IB commander, told the INQUIRER.

The “Bantay Laya” battalion was formed in 2009 in Iloilo, and it has not since been deployed outside of Western Visayas. They have been assigned in internal security operations in Guimaras province, Iloilo City and parts of Iloilo and Antique provinces.

Morga acknowledged that their new assignment is a big challenge for the battalion.

He said the troops were experienced in “sporadic” firefights with NPA rebels usually lasting 15 minutes in hinterland villages unlike the sustained urban warfare with house-to-house fighting in Marawi City. 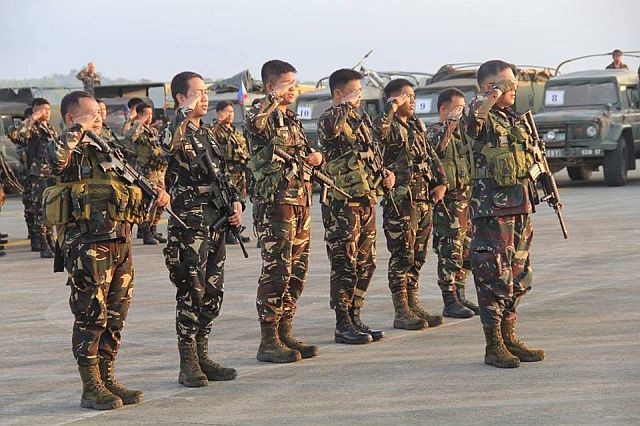 The 82IB is expected to be deployed in areas vacated by government troops undertaking clearing operations in Marawi.

But Morga said they are ready to be assigned to the frontlines.

Morga, who is former commander of the army’s 55IB assigned in Butig town in Lanao del Sur which operated against the Maute terror group members, said he apprised his troops on the situation in the area and the nature of operations against the Maute.

“The troops are already capable. This deployment will further improve the battalion’s capability,” Morga said.

The battalion was earlier scheduled to be deployed in Marawi in January this year but was asked to stay to help secure high-profile events including meetings of the Association of Southeast Asian Nations (Asean).

The troops were again put on notice two weeks ago for possible deployment, but it was only on Friday that the new assignment was confirmed.

The 33rd Reconnaissance Company assigned on Negros Island has been brought to Iloilo to take over the area left by the 82IB. Troops from the army’s 61IB based on Tapaz town in Capiz have also been redeployed, according to Morga.

He said the troops are hoping that the operations in Marawi will end soon so that they can return to their area of operation in Western Visayas.

In Butuan, President Duterte denied allegations that the fighting erupted because there was failure on the part of the government.

But he did say that the government had a “very soft policy towards rebels,” the reason why officials failed to know that the militants were already stockpiling firearms and ammunition in Marawi City.

“It turns out that these Maute were bringing the firearms surreptitiously,” he said, adding that the government did not know the volume of firearms that was smuggled into Marawi.

“And besides, it was not a failure of intelligence because if we see people with firearms, they claim to be members of the Moro Islamic Liberation Front or Moro National Liberation Front,” he said. “All the while, the Maute, with the connivance of the politicians there, the warlords, were stockpiling.”

This, he said, was the reason the militants had not run out of ammunition. 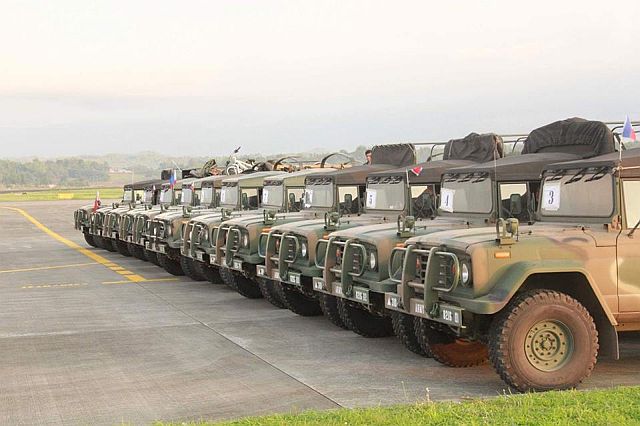 “When government fires one, they fire back with five,” he said. “So it was like they have endless supply when Maute rose to fight the government.”

He said the militants were just waiting for the right time to attack. And when fighting erupted, he said, “the Indonesian forces went down from the hills.”

He said the militants fighting in Marawi was a “conglomeration of ISIS from Syria, Indonesia, Malaysia, Sri Lanka, Arabs (actually, Kuwaitis).”

But the President said the fighting was “winding up but at the cost of many soldiers.”

And because government has already lost more than 50 soldiers in the fighting, Mr. Duterte said they would have to “finish” the militants by nipping them in the bud.

Duterte also assured the soldiers that the government would provide everything they need.

“I am with you in everything,” he said, adding that the soldiers’ needs will be a “priority.”

“I will not abandon you,” he said, even promising to raise a P50-billion trust fund for the education of the troopers’ children.

But he has one request to those in the battlefield: “Just be a clever soldier, use all your instincts to survive.”

“I know what’s always in your mind — your family,” he said.

All throughout his speech, the President did not utter a single cuss word.