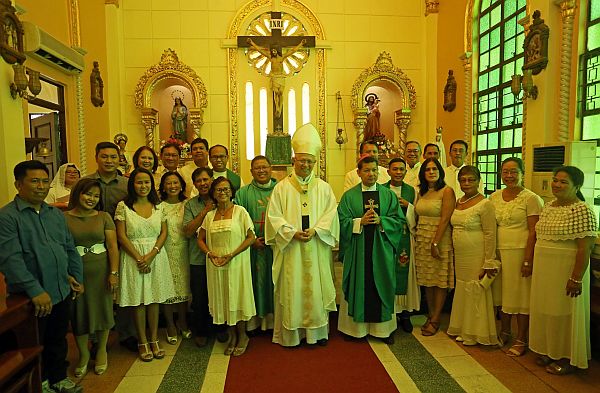 Cebu Archbishop Jose Palma poses with couples after the Mass to launch the Archdiocese Committee on Environment at the Archbishop Palace.

The Catholic faithful and even non-Catholics were invited to plant trees in Cebu whenever they celebrate weddings, baptisms and other important milestones in their lives.

The Mass also included the renewal of marriage vows of nine couples in an activity dubbed as “eterni-Tree.”

After the Mass, each couple was asked to plant a tree in the Eucharistic Garden of Thanksgiving inside the Archbishop’s Palace.

One of the couples, Glenn and Maya Sarroza, said they will make sure to visit every month the acacia tree they planted in the garden to make sure it grows well.

Palma blessed the planted seedlings and later told reporters that love within the family should overflow to nature through planting and taking care of trees.

Rev. Fr. Sarsonas said their program is in line with the encyclical issued by Pope Francis on caring for earth, humanity’s “common home.”

The IEC-CEC was established June last year, and initiated a parish community-based pocket forest program aimed at planting 13,000 trees all over the areas covered by the archdiocese.

Sarsonas said the tree planting is a sign of penance for the trees that were cut during the construction of the IEC Pavilion in Cebu City and as a way of helping in the fight for climate change mitigation and biodiversity conservation.

A series of spiritual formation activities joined by parish workers and volunteers ensued, followed by technical training that began in late 2016 up to this year.

Through the CACEC, Sarsonas said the Church hopes to expand their tree planting target to half a million trees in the province.

He said the church hopes that other stakeholders will be motivated to pursue sustainable and environment-friendly livelihood programs for local communities.

Sarsonas said they will eventually partner with the Ramon Aboitiz Foundation Inc. (Rafi) and the Cebu provincial government to expand their tree-planting program to the countryside.