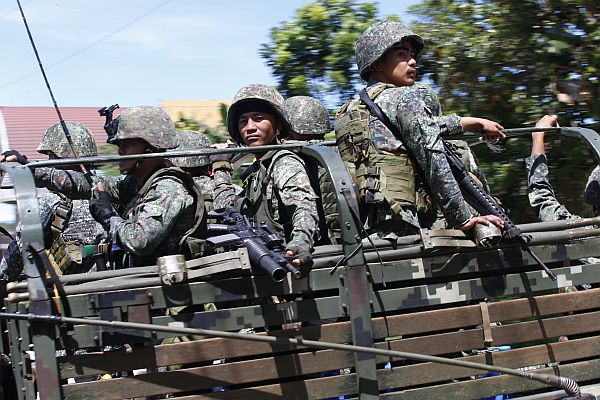 Marines patrol in Marawi City in Lanao del Sur. The Armed Forces of the Philippines sent more troops in the battlezone of Marawi to flush out members of Islamic State-inspired terrorists that still occupying four villages.
INQUIRER PHOTO

Government troops took control of a Maute terrorist group stronghold in Marawi City’s battlezone, the military said on Tuesday.
Dansalan College, one of Maute’s positions since the fighting broke out on May 23, fell into the government’s hands on Monday, the Joint Task Force Marawi said in a statement.

This was also one of the areas partially burned by the terrorists during the early part of the clashes.

The military said that the school is host to some high rise structures that serve as machine gun nests and snipers’ vantage position of the terrorists.

This brings to 410 the total number of firearms recovered by combined government forces from clearing operations.

A cadaver of a foreign-looking individual believed to be one of the fighters from Singapore was recovered by troops, the statement also said.

A total of 11 suspected foreign fighters have been reportedly killed so far.

The military also said they have rescued 1,717 individuals, while there are still about 300 to 500 civilians trapped in the conflict zone.