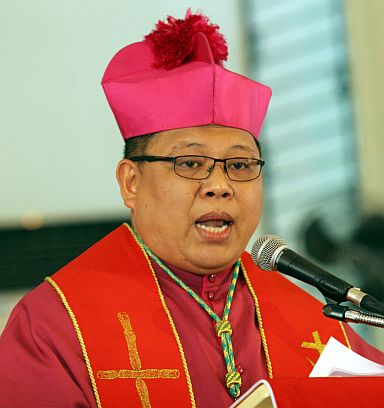 “The appointment is concurrent so he will both serve as military administrator and at the same time continue to function as auxiliary bishop of the Archdiocese of Cebu,” said Fr. Zenon Guanzon, the private secretary of Cebu Archbishop Jose Palma.

Florencio, 51, and a native of Capoocan town in Leyte, will serve as administrator of the Military Ordinariate while waiting for the Holy Father to appoint a permanent military bishop.

It has jurisdiction over all military, police and coast guard personnel, their dependents, and the civilian employees of all branches of the Armed Forces of the Philippines.

Florencio was ordained priest on April 3, 1990. He completed his studies in Philosophy at the Sacred Heart Seminary in Palo town, Leyte and Theology at the University of Sto. Tomas in Manila.

From 1994 to 1999, Florencio studied in Rome at the Pontifical University of the Holy Cross where he obtained a licentiate and a doctorate in Sacred Theology.

In July 2015, Florencio and Most Rev. Dennis Villarojo were appointed auxiliary bishops of Cebu by Pope Francis.

Read Next
Drug surrenderer shot dead inside hut in Sibonga