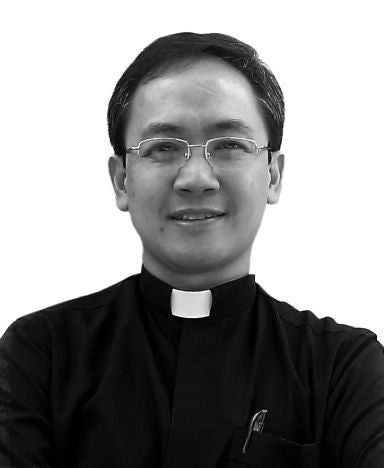 The children inside the chapel were filled with wide-eyed curiosity. This was the first time, perhaps, a priest would tell them what was so special about that quiet place.

The chaplain started off with a prayer, and they gingerly seated themselves. A number were still very young and small.

These listlessly dangled their legs and randomly swayed them like vines hanging over the gaping edge of a cliff. But Father Joe still had their full attention as he began.

“How many have watched ‘The Pirates of the Caribbean’?”

A few children raised their hands.

“What was the most important thing for Captain Jack Sparrow?”

One boy waved his hands frantically.

“Can I go to the CR?” Philip surprisingly asked.

“Now, who is smart enough to remember what it was?”

“The compass,” a dad whispered to his son.

“What was that?” Father Joe directed himself at the boy who was given the answer.

“A compass,” he replied shyly.

“Why was it important?”

“Do you know what our greatest treasure is?” Father then said in a lower and secretive tone.

The children suddenly became very curious and interested. Some straightened up on the bench. Others who were more restless stiffened with attention.

“Do you want to have a compass like Jack Sparrow to find the world’s greatest treasure?”

“Really?” he teased the boys.

“But it’s a compass that you cannot keep selfishly for yourselves. You must share it with others so they can also have the greatest treasure.”

“Where is it?” Johnny began looking around.

“You’re inside the compass, Johnny,” Father replied to the boy’s surprise.

“And where is the treasure?” Philip asked while simultaneously zipping up his pants when he realized his fly was open.

“It’s there in that thing called the Tabernacle,” Father Joe pointed at the green veiled ornate silver box in the middle of the chapel’s presbytery.

“Tabernacle. [Accent in the first syllable] Which means tent. It is where Jesus stays, our greatest treasure!”

The children were speechless.

“But it’s sad that not many know about this compass, because they are blinded by other treasures. They have forgotten that here is the most important treasure.”

One child began to look downcast at Father Joe’s lament.

“But you guys can help them, right?” the priest suddenly said in a very encouraging tone.

“And perhaps, it may help you to help them by using the word Hotspot!”

“That’s where we get free Wi-Fi,” Arnold said.

“Games and movies too!” Simon added.

“Also… But isn’t it sad that more people going to Wi-Fi hot spots while very few go to the compass of the chapel where Jesus is?”

“Well, all that can change if we begin going more often to greet Jesus, our greatest treasure, our God, who is always here for us and with us,” Father Joe explained.

“And like I said, you can help them using the word Hotspot?” the priest reminded them.

“Tell them that the chapel has a Hotspot because it stands for ‘He is Our Treasure, Secretly Present in Our Tabernacles.’”