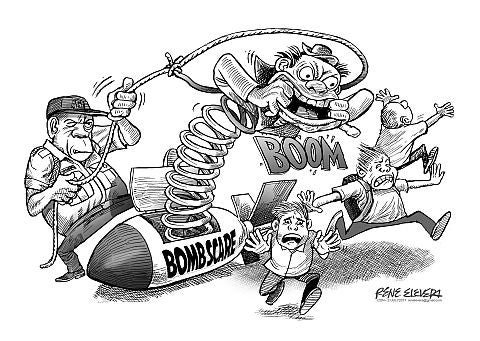 How can one tell if a bomb threat made over the phone, or in whatever mode it was delivered, is genuine or fake?

That’s the challenge faced by Cebu City authorities following last Tuesday’s bomb scares that resulted in the suspension of classes in seven schools after someone who went by the name Diana dela Cruz called the Cebu City office of the Department of Education (DepEd) to warn of a bomb placed inside the Mambaling Elementary School.

While there were no bombs found in that school and six others, this Diana dela Cruz then went on Facebook to warn anew of a bomb in the Mambaling school, ending the post with the name “IS Maute group” in reference to the terrorist group now engaging military troops in Marawi City.

Whoever is responsible for these bomb hoaxes will be held criminally liable. Presidential Decree No. 1727 states that those caught making bomb hoaxes or scares will be “upon conviction punished with imprisonment of at least five years or a fine of at least P40,000” or both at the court’s discretion.

But House Bill 5294, which was filed three years ago at Congress, calls for stiffer penalties on bomb pranksters and updates PD No. 1727 to provide safeguards against those who maliciously accuse others of making bomb jokes.

It also provides “for a penalty of six months to one-year imprisonment or a fine of P300,000 to P1 million against those found to have maliciously and willfully making false accusations against another person.”

While the current administration calls for stiffer penalties against bomb pranksters, this bill remains pending in Congress. But bureaucratic red tape and political grandstanding aside, what’s to aid the police in detecting and stopping these dangerous jokers from causing mass panic?

In the case of Cebu City, there’s a command center that would respond to and process any bomb threat to see if it is the real deal. One can never really tell when a terrorist bomb attack will occur.

But the best response would ultimately be to report the bomb threat immediately to the authorities and let them deal with it directly while evacuating anyone within the vicinity into a safe distance in an orderly fashion.

It’s counterproductive and downright dangerous to panic and spread the word since it would cause mass hysteria and stampedes, which is what the perpetrators may be after all along.

By reporting it to the authorities, there’s a greater chance for these criminals to be caught immediately and made to answer for their crimes.

Hopefully, one of them gets penalized for serving as a warning to anyone not to engage in such dangerous behavior.