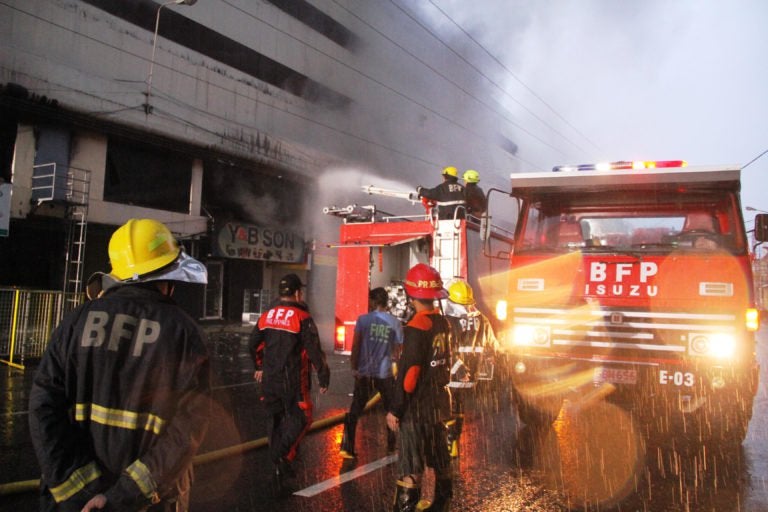 Firefighting continues at 5 a.m. on Sunday, July 23, 2017, more than four hours since the fire broke out at the Gaisano Capital in Ormoc City.
(PHOTO BY ROBERT DEJON / INQUIRER VISAYAS)

Ormoc City — This city lost its oldest mall in a fire of still-unknown origin predawn on Sunday, more than two weeks after the city and most of Leyte was hit by a strong earthquake.

It took firefighters more than nine hours to put out the fire that gutted Gaisano Capital, a one-hectare mall located at the heart of the city.

The fire broke out at 12:45 a.m. on the second floor of the building where the plastic products and textile were located.

Paolo Tolentino, security guard of the nearby Friendly Inn, told the Philippine Daily Inquirer that he immediately informed their front desk when he saw smoke coming from the mall about 1 a.m.

A few minutes later, he added, a big fire engulfed the mall.

Fire investigator SFO3 Roel Wenceslao said the blaze was already eating the first floor of the mall when they arrived about 10 minutes after the report was received.

Wenceslao said fire trucks from Albuera town then arrived, followed by those from the towns of Kananga, Merida, Isabel and Tabango; and Baybay City.

Gaisano Capital was the first mall to rise in the city. It sat on the city-owned property where the old market building of Ormoc and transport terminal used to stand.

In 1994, the city leased it to Taipan Corporation of Henry Gaisano for 25 years where the Gaisano Capital later stood.

The proceeds from the lease were used by the then administration of the late Mayor Eufrocino M. Codilla Sr., to build the Ormoc Superdome.

Read Next
US readies Pacific missile tests to counter attacks