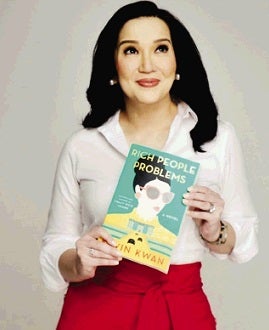 I’m being brought to the Queen City of the South by @nbsalert,” revealed Aquino, who posted a photo of her holding a copy of Kwan’s latest book “Rich People Problems.”

Although no official confirmation has been made, fans have long speculated that Kris plays a role in the highly anticipated film adaptation of “Crazy Rich Asians,” especially when she flew to Singapore in June and posted photos of her with the film’s cast members Constance Wu and Gemma Chan.

Fans were excited about Kris’ upcoming event in Cebu, giving her post more than 11,000 likes, as of Tuesday.