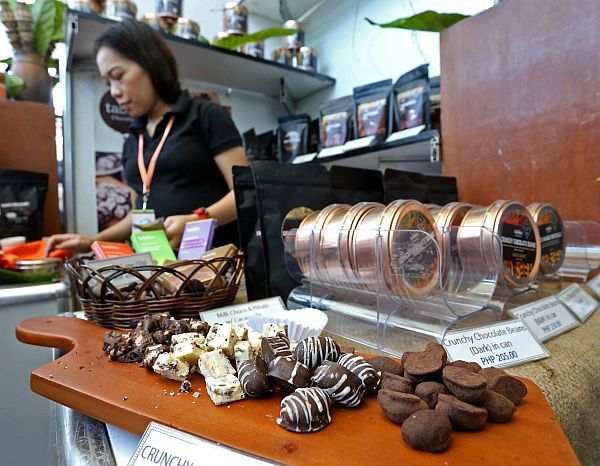 Chocolate products made from cacao beans from Davao City such as the Crunchy Chocolate Beans in cans were displayed at the Cebu Grand Convention Center during the National Cacao Congress in Cebu on August 9. The Congress was held in here because of the potential of Cebu becoming a cacao production hub.

Realizing the economic potential of the local cacao industry, the Cebu Provincial Agriculture Office will push for more financial assistance from the Cebu provincial government, but only after the office complete its study on the cacao farmers in Cebu.

Dr. Roldan Saragena, Cebu provincial agriculturist, told Cebu Daily News that their office is now conducting data gathering such as profiling cacao farmers and their respective farms to determine the exact number of farmers engaged in this particular industry.

“In the meantime, we allocated P1 million annually since 2014 for cacao farming. There is also an increase in demand of cacao products, so definitely there is an increase in supply,” Saragena said.

Their office is monitoring the northern towns of Tuburan and Asturias, which are likely to be at par with the growing cacao industry in their counterparts in southern Cebu such as Carcar City and Argao.

The recently concluded National Cacao Congress on August 9 in Cebu City prompted the office to encourage farmers to plant cacao.

Valente Turtur, chairman of the Philippine Cacao Industry Council, said during the forum that they chose Cebu as a venue for the Congress because they see Cebu as one of the potential areas for planting cacao.

Turtur said that the Council had seen Cebu and other areas in Central Visayas as possible areas to become main cacao production hubs in the future.

He cited Carcar City and Argao town in southern Cebu as areas where farmers have already planted cacao trees, which he estimated to be about a hectare of farmlands planted with cacao.

Saragena said that the Cebu Provincial Agriculture Office was hoping to complete the study by year’s end.

He said that once they finish their research on cacao farming in Cebu, then they could make their request to Cebu Gov. Hilario Davide III to increase the annual budget for cacao farmers in the province.

He said that the P1 million allocation for cacao farming, however, is spent on importing cacao seedlings from Davao City, which is among the largest supplier of cacao products and byproducts in the country and the world.

The cost of this chocolate-producing seedling is estimated at P18 each, but the challenge for most farmers is not the cost but the lack of appropriate knowledge and skills needed to ensure their cacao seedlings will grow into a fruit-bearing tree in less than two years.

“If you already planted cacao a seedling, within 21 months, you can already harvest cacao beans… and you don’t need to pour much effort into raising it as long as you are equipped with the needed knowledge and skills,” said Saragena in Cebuano.

In a first-come, first-served basis, cacao farmers in Cebu can avail of free cacao seedlings from the provincial agricultural office.

Saragena stated that in a year, around 20 to 50 Cebuano cacao farmers have availed of the free cacao seedlings from their office.

“If there will be additional funds, of course, we can provide them more seedlings to encourage further our farmers to plant cacao,” he said.

Aside from more seedlings, Saragena said they are planning to hire more cacao experts to assist farmers on planting this particular crop.

However, the country has still a long way to go before it can become a major player in the cacao and cocoa industry.

This despite the first cacao tree in the Far East has been planted in the Philippines in 1670.

72nd in the world

“We are ranked 72 in the world in cacao production. Our production is only 0.01 percent of total global production,” said Department of Trade and Industry (DTI) Assistant Regional Director Edwin Banquerigo during the National Cacao Congress.

In fact, the Philippines is way behind Malaysia as far as the development of the cacao industry is concerned.

Malaysia is ranked 4th in the global cacao industry, said Haya Ramba, director of Malaysian Cocoa Board (MCB). Ramba made a presentation on how the MCB helped in the development of the cocoa (cacao) industry in their country on the last day of the National Cacao Congress held in Cebu City.

Surprisingly, Malaysia’s cacao production is lower than that of the Philippines, which is estimated at 10,000 metric tons each year. Malaysia imports cacao beans from Indonesia, which it grinds and export in form of cocoa raw materials and chocolate products.