Lumads, Moros to bring issues to Digong in Manila 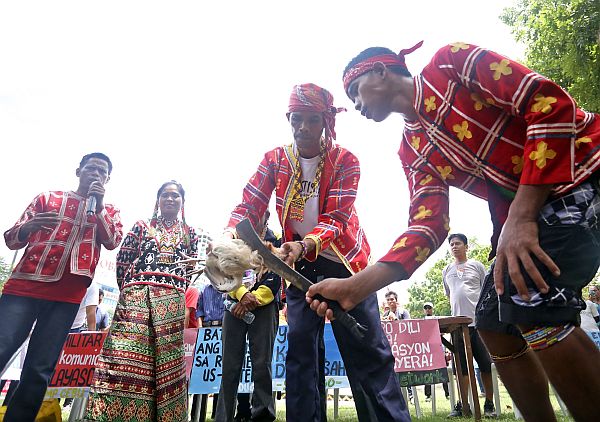 The Lumads mark the start of their four day activity in Cebu with a ritual, involving the sacrifice of a chicken.
CDN PHOTO/LITO TECSON

Around 500 members and leaders of different indigenous groups in Mindanao including Moros and Lumads are embarking on an “information tour” in the Visayas and Luzon with the aim to end martial law in Mindanao.

Called the “Lakbayan ng Pambansang Minorya,” which they also call a movement with the end goal to end martial law in Mindanao, had their first stop in Cebu City yesterday.

Kerlan Fanagel, of PASAKA-Southern Mindanao Region and the spokesperson of the group, said that aside from ending martial law, they are also appealing to President Duterte to stop the airstrike attacks in Marawi City, where government forces are still fighting against the Maute group, which the government tagged as a terrorist group with links to the terrorist group, Islamic State of Iraq and Syria (ISIS).

Fanagel said that after Cebu they would go to Masbate and other parts of Luzon with their last stop in their “information tour” at Mendiola in Manila on August 31.

He said that they hope that on their Mendiola stop, they could get to meet President Rodrigo Duterte at Malacañang and discuss the plight of their people.

He said that there are around 169,000 Moros and Lumads that were evacuated from different provinces in Mindanao when martial law was declared and because of the ongoing armed conflict in Marawi.

Fanagel said aside from the martial law and Marawi conflict issues, the Lakbayan would also raise awareness on the different issues faced by the lumads and other indigenous people in Mindanao.

These include the human rights violations allegedly committed by members of the Armed Forces of the Philippines and their claim of discrimination against the Maranaos by the military.

Issues also on land grabbing of ancestral domains, mining and a call to revive the peace talks with the National Democratic Front of the Philippines are also among the issues that they plan to raise when they would meet the President.

The group will hold forums, cultural shows, film showing, prayer and protest rallies and a torch parade before they would leave Cebu on Friday.

Read Next
PDEA-7 to train security men of Mango bars