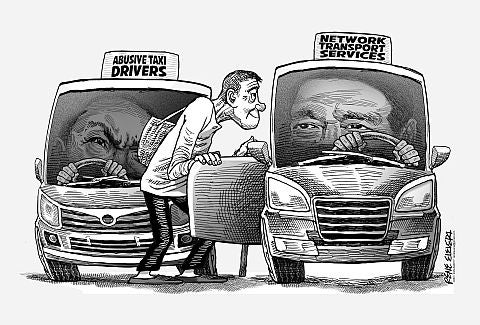 The case of taxi driver Norman Enojada — who was penalized for dumping an elderly passenger in the middle of a rainy street — should serve as a constant reminder and warning to taxi operators and drivers not to maltreat and abuse their customers.

Based on social media accounts of the incident, Enojada dumped 88-year-old Inday Benomera minutes after she boarded his taxi on the flimsy and unverified excuse/alibi that the area she was headed to was flooded.

How Enojada came up with the assessment when there was nothing in his story about it to the Land Transportation Franchising and Regulatory Board (LTFRB) during last Tuesday’s hearing speaks volumes about the lengths to which some taxi drivers will go just to dump passengers whom they deem are not worth their time and effort.

It’s not as if Benomera didn’t have money to pay for her fare. Were it not for the kindness of strangers, Benomera would have been left stranded and might have frozen to death from the cold rain.

If something happened to her, Enojada and his operator would have faced far more serious charges than the charges of discourtesy and refusal to convey that were slapped on them by the LTFRB.

Benomera’s case isn’t isolated, nor will it be the last. And unfortunately for taxi drivers who work hard and do good deeds like returning money and valuables to their passengers long after they’ve neglected them, more taxi drivers like Enojada will be roaming the streets being picky and abusive towards commuters.

To be precise, Benomera’s plight would not have surfaced in the public spotlight were it not for the vigilance of some netizens who reported it to traditional media outlets and then made repeated calls for action from the LTFRB who, to their credit, responded eventually.

But not every commuter complaint against abusive taxi drivers nor drivers accredited to Uber or Grab had been acted on by the country’s transport agencies.

There’s the 2015 case of call center agent Dave Say Horca in Cebu City who was threatened with violence by a taxi driver named Joel Ramos when the agent tried to collect the P10-less fare from him.

And we’re not even talking about the cases of harassment committed by taxi drivers against their female passengers, some of whom unfortunately end up being molested.

Both netizen and commuter vigilance are needed to push the LTFRB into swiftly addressing complaints against abusive taxi drivers, who need constant reminding to always adopt a customer-first attitude in their operations.

Benomera’s case also explains why the taxi operators are fast losing ground to Uber, Grab and other ride-hailing companies who offer superior service and better attitude towards their customers.